Talia, Hannah and Emily in my living room waiting to wrestle, 2019

Blackberry picking by the side of the road wrestlers round two, 2019

When I looked at you the light changed, 2019

Blackberry picking by the side of the road wrestlers round one, 2019

I wonder was it really as beautiful as I remember, 2019

Fredericks & Freiser is pleased to present the upcoming exhibition When I Looked at You the Light Changed, Jenna Gribbon’s first solo show with the gallery.

In this exhibition, Gribbon presents two series of works, both of which draw from memory, art history, and contemporary life: one renders the artist’s close companions within tranquil scenes of erotic or familial camaraderie, and the other features seminude female bodies in the charged act of wrestling. Gribbon’s syncretic canvases draw on several centuries of painting: figures disporting themselves in a sylvan setting recall Fragonard’s fêtes galantes; an interior’s swiftly brushed-on walls evoke the cursory backgrounds of Mary Cassatt; gently distorted architectural features summon the laissez-faire depictions of Karen Kilimnik. Sampling freely from various representational techniques and movements, Gribbon’s paint handling swerves from the virtuosic to the intentionally slapdash; fast, impressionistic strokes often abut minutely illustrated details, highlighting the artist’s interest in collapsing numerous pictorial strategies into a single canvas.

Gribbon’s wrestling series takes on the art-historical trope of grappling figures, extending from the bulging Greek athletes in Archaic friezes to the lean youths of Thomas Eakins’s canvases. In placing women’s bodies in these poses typically occupied by men, Gribbon inverts the homoerotic frisson inherent in such works. Using staged photographs of her tussling friends as source material, Gribbon sites her contemporary figures in locations conjured from her past, thus imbuing her own personal history with an implied sapphism transposed from the present. In the canvases that feature her intimate associates, Gribbon provides a different kind of frisson: that of visual access to a private world, in which the viewer can witness the artist’s own hand tenderly touching her girlfriend’s face; or the same hand reaching toward her young son, asleep in a tangle of blankets.

In both series, the artist aims to highlight the construction of personal narrative, in which the swirls of art history, photographic documentation, childhood memory, and the recent social past are maneuvered into logical cohesion. The malleability of memory—its sharp retention of certain details and hazy recollection of others—is materially reflected in Gribbon’s eclectic brushwork, which shifts from the casual to the careful in turn. The artist heightens memory’s lapses and exaggerations by departing from a strict adherence to realism, frequently employing aberrant colors and disregarding the rules of perspective. Some of Gribbon’s representational divergences are intended to discomfit the viewer, most noticeably the neon pink used to depict the nipples of her female nudes, which snare the eye in a twofold trap, encouraging the delectation of this flesh and simultaneously provoking self-consciousness of the prurient gaze. By inviting the viewer into her private domain—offering intimate moments of memory and present-day life—Gribbon makes us voyeurs and witnesses to an idiosyncratic history, in which time and desire twist and fold, like her sinuous figures.

Jenna Gribbon (b. 1978, Knoxville TN) lives and works in Brooklyn, NY. She received her MFA from Hunter College. Her most recent exhibitions include "Them" at Perrotin, New York and "Paint, Also Known As Blood: Women, Affect, and Desire in Contemporary Painting" at the Museum of Modern Art, Warsaw. 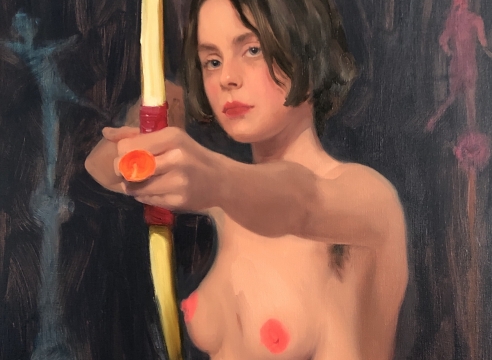 Jenna Gribbon: When I Looked At You the Light Changed