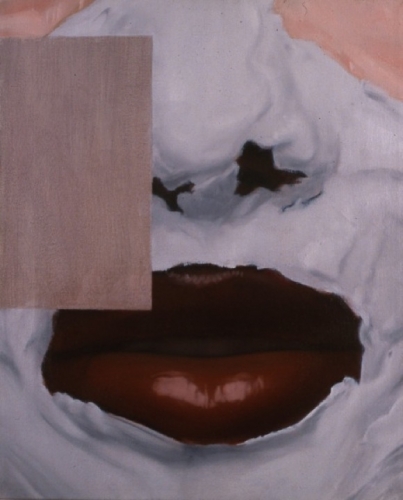 Through lacking the letters patent conferred upon the original Ferus Gallery crowd, Robert Overby-who began as a notable graphic designer-has entered the West Coast canon, if rather circuitously. Overby's late paintings, which date to the last fifteen years of a short life (he died of Hodgkin's deisease in 1993 at the age of 58), are hardly the most original of his works, but they fill in a critical chapter with regard to his growing posthumous rank.

In "Painting from the '80s" --an exhibition staged by Fredericks & Freiser and Andrew Kreps--Overby's sense of composition ("layout" is really closer to what I mean) countered college-derived images lifted from popular culture (at times reduced to the Benday dots of mechanical printing) against severed heads or fetishized excisions (eyes, mouths) or geometric shapes (patterns, targets and circles). Though an agreeable achievement, there is scarcely a painting from this era through which the overtones of a dozen prototypes do not resonate. The blandishments of fashion photography particularly linger. Man Ray's Black and White, 1926, or Baron Adolph de Meyer's 1927 cosmetic masks for Elizabeth Arden are still sensible in Overby's paintings of sixty years later. In the best of Overby's paintings, the more or less equal weight given to head versus disc or rectangle may be a redemptive compositional key; typically, the consistency of scale marking the artist's few preferred elements discourages a residual sense of location in illusionistic space.

Overby's finest, most exploratory work was not on view--the abject, collapsed soft reliefs of early 1970's, which resulted from latex being troweled upon structural elements in desuetude: houses, walls, and the like. The latex, once cooled into a sheet and tugged free from its architectural armatures, displays the disquiting inverse memories of the original providential structures--features such as vertical siding and sills, or windowpanes and fireplace manel, now tumbling and inchoate and retaining some of the clotted detritus and stain of the original components. I assume that this noteworthy post-Minimal achievement was antidote to the neatnik necessities of the "good design" of which Overby was past master--a kind of palliative to its sheer anality. The evolution from design to sculpture would untimately lead to the image bank of the paintings currently on view.

For all its commericial rootedness, a socially ameliorative ambition coupled with a sense of autonomous beauty is inherent to the perennial "sans-serif utopianism" of modernim. But by the time we reach the borderless nirvana of our own digital infinity, aesthetic cheeseparing tends to be egregious from the outset. So, while I must seem a bit peckish about Overby's late paintings, both the Fredericks & Freiser and Andrew Kreps Gallery presentations did contain works that may turn out to be masterpieces.

At Fredericks & Freiser, for example, two enlarged color sepaarations of Brooke Shields--Brooke, 1988, and B Two, 1989--suggestive of Warhol and Polke, captured the sense of Hollywood's tawdry  glamour and ostentation and footnoted he fracas surrounding Richard Prince's appropriation of Gary Gross's photograph of the prepubescent actress. Other important works to be seen there were B&W, 1980-81, and Computer Whiz, 1987, with their eroticized masklike punctures emphasizing the eyes or, as in What Else is Important, 1981, the lips: James Rosenquist meets Polke with a pinch of Hannah Hoch.

In a rather David Salle-like thumbs-up to the transparencies of Francis Picabia's "bad painting," Escape from ONWE, 1980-86, was a Kreps standout. Equally noteworthy were the disembodied heads of Thanks Leo Manso, 1987 (an affecionate nod to the admired collagist and instructor of design at Cooper Union in the late 1940's), or the billboard-like glamour-puss of Space Dreamin', 1988. In all, these tandem exhibitions provided an informative overview of the eroticized late work of an artist who looms ever larger in the panthen of the new Pacific Rome.