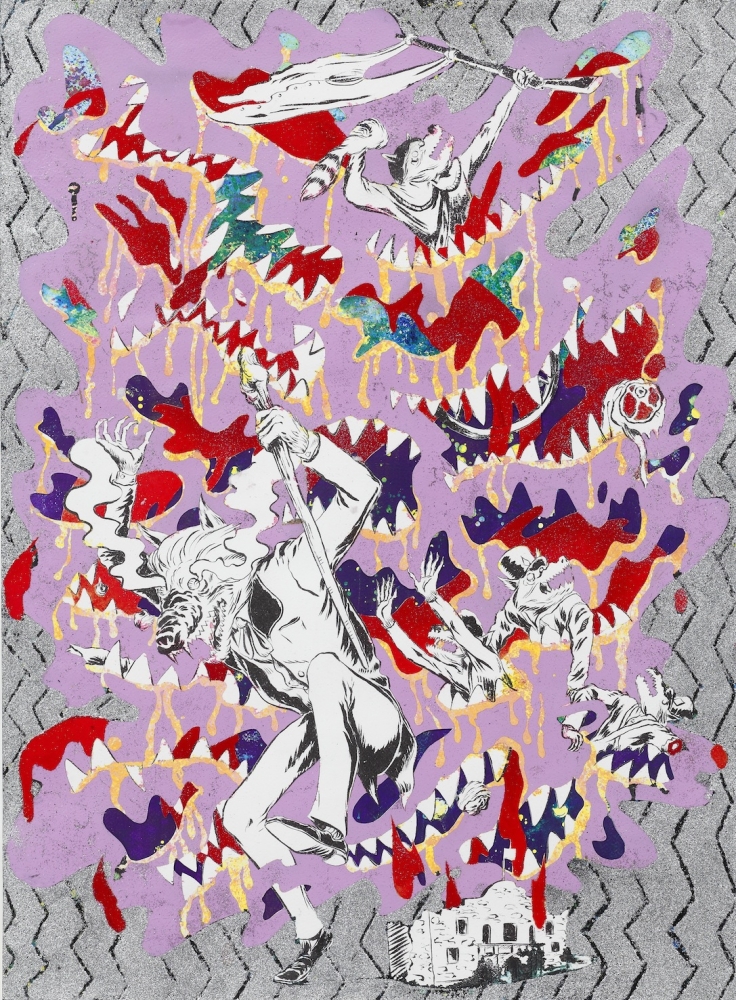 WASHINGTON — It was five years ago last August that Peggy Cooper Cafritz’s entire life was erased by a fire that tore through her elegant, art-filled house here.

What was also wiped out was one of this city’s more lively social hubs, the nexus of activists, politicians and young artists who swirled around Ms. Cooper Cafritz, now 67, the gruffly charming saloniste, arts patron and former president of the Board of Education. Gone, too, was her prodigious and enticing collection of contemporary African and African-American art, the work tracing a not-always-straight line from Jacob Lawrence, the late narrative painter, to the provocations of Kara Walker, Kehinde Wiley and Hank Willis Thomas, among other works.

In the years since, Ms. Cooper Cafritz has been battered not just by the heartbreaking aftermath of fire, but by a lawsuit against the local water authority, which she sued for $30 million for negligence in failing to maintain the fire hydrants in her old neighborhood, as well as a series of catastrophic health issues: two failed back surgeries; an emergency gall bladder operation while in Croatia, which put her in a coma for 11 days; a bout of pneumonia this fall.

And, finally, there were the sudden deaths, in the last two months, of a much loved mentor and priest, the Rev. John Payne, head of the Duke Ellington School for the Arts, the high school that Ms. Cooper Cafritz co-founded while she was still in college, and her nephew, A. J. Cooper, 34, a Washington community activist who was running for city council when he suffered a heart attack.

Amid this turmoil, Ms. Cooper Cafritz began to collect new work — “feebly at first,” as she puts it, and then with the voraciousness that defines her — and make herself a new home in a glass, concrete and steel duplex condominium that she bought for a little over $3.25 million in 2011 and completely rebuilt in three months.

Set among the think tanks and embassies of Massachusetts Avenue at Dupont Circle, it is nowhere near “Caucasian Valley,” as Ms. Cooper Cafritz’s grown sons, Zachary and Cooper, coyly describe Kent, the tony neighborhood where they grew up. With odd levels, trapezoidal rooms and minimal wall space, the space is also an unusual choice for a collector, and nothing like Ms. Cooper Cafritz’s old habitat, the gabled and columned eight-bedroom estate she built in the 1980s with her ex-husband (the developer Conrad Cafritz, whom she divorced 1998) and filled with English antiques.

“I saw 500,817 places,” she said, settling gingerly onto a sofa (her back still bedevils her). “And my kids loved this one. They thought it would make me less isolated, and closer to them. I also decided early on that reality and good sense dictated that this could not be a reconstruction of anything: not of a kid’s teenage life” — Cooper was only 17 when their house was destroyed — “or a wardrobe, or an art collection. I wasn’t going to reconstruct what was, but to look at everything anew.”

Eye-popping, lovely and provocative, the place is now layered with so much new work, it provides a rich tutorial in contemporary and emerging (“Do we still say that?” wondered Ms. Cooper Cafritz) African-American art, a mash-up of the best of what you might find in a group show at the Studio Museum in Harlem, PS1 and the Jack Shainman Gallery in Chelsea, one of Ms. Cooper Cafritz’s longtime dealers.

For Ms. Cooper Cafritz is no minimalist. Just look at the area, quite small, that constitutes the front hall: On and in front of the only wall are floor-to-ceiling beaded tendrils by Leonardo Benzant, a Queens artist; a circular painting by Mark Thomas Gibson; a glossy red cubist “chair” by Stephane Ducatteau, a French designer; a luminous collage painting by the Nigerian-born Njideka Akunyili Crosby; a Louis Vuitton suitcase painted with a portrait of a member of the band De La Soul by Iona Rozeal Brown (who uses the name iROZEALb); and a multicolored dhurrie that looks like a patchwork quilt.

In some rooms, it can be hard to find the furniture. Paul Siskin, a Manhattan designer who helped Ms. Cooper Cafritz put together her first house and is now a close friend, said: “I wasn’t crazy about the new space — it’s very industrial — but the location is better. We made her as comfortable as could be” — throwing in a sofa or two — “but she doesn’t care about that. She’s about her art. It’s big and it’s bold and it’s in your face, and it all says something about her. She’s not a shrinking violet. God bless her for that.”

Thelma Golden, director of the Studio Museum in Harlem, who described Ms. Cooper Cafritz’s loss as “an unimaginable event,” added: “What’s especially exciting and truly admirable is that Peggy has not sought to replace the incomparable collection that was lost. She has instead continued in the spirit that built that collection: collecting work that she loves, championing young artists and embracing the pioneering work being made by diverse artists from around the world.”

Or, as Ms. Cooper Cafritz said, her collecting “has now reached disease levels in my being.”

More than 300 works, worth millions of dollars, were obliterated by the fire, and much of it was underinsured, she said.

“I had an El Anatsui” — the Ghanaian artist who weaves bottlecaps, among other materials, into epic shimmering tapestries — “that would now sell for $600,000. I bought it for maybe a 20th of that amount and never changed its insurance value. That’s the most egregious example, but there are tons.”

Ms. Cooper Cafritz continued: “El Anatsui said he’d make replacement work. A lot of artists had that response. I haven’t followed through because that feels very awkward to me. The artists have been very, I would almost say, loving, and some of them have been downright sweet. Hank” — Mr. Thomas — “calls me up every now and then just to see how I’m doing.”

The source of the fire, which started on the back porch, remains a mystery. (Ms. Cooper Cafritz was in Martha’s Vineyard when it happened.) However, the blaze could have been contained, according to testimony from the firefighters, if there had been adequate water pressure in the hydrants in the area.

In November, Ms. Cooper Cafritz settled her suit with the water authority for an undisclosed amount.

“I thought the fire was the worst thing that could happen to me,” she said of the court battle. “I concluded that it would be better for me physically and emotionally to settle.”

Ms. Cooper Cafritz has never been a stranger to either catastrophe or achievement, which oftentimes have graced her simultaneously. After law school, she became a fellow at the Woodrow Wilson International Center for Scholars, the youngest ever; around the same time, she was kidnapped and attacked while on a trip to Paris. She is both resilient and strategic, a fixer in that Washington way: canny, dogged and beguiling.

“Who else would have emergency gall bladder surgery and go into a coma in Croatia during a doctor’s strike but Peggy?” Mr. Siskin said. “She does everything in a big way. You see it in her art. Some of the people I deal with have beautiful apartments that, well, are bigger and more important than they are. Peggy is the opposite. Peggy is much bigger than any apartment.”

At midcentury, the Coopers were the most well-to-do black family in Mobile, Ala., Ms. Cooper Cafritz said. Her grandmother opened the first school for blacks there; the document that memorialized this was lost in the fire. Her father was a prominent businessman who owned a string of funeral homes and insurance companies across Alabama, but money couldn’t mitigate the challenges the family faced in that city in the 1950s.

When her father tried to integrate Mobile’s Catholic schools by sending his oldest son to the Jesuit school there, the bishop threw him out and barred the rest of the Cooper children from attending high schools in the diocese. Ms. Cooper and her four siblings ended up in boarding schools up north.

During her freshman year at George Washington University, she and others fought to move the sororities and fraternities off campus because they were discriminatory. In her junior year, she co-founded a summer program that became the Duke Ellington School of the Arts, an arts-intensive high school that has nurtured generations of minority visual and performing artists.

But when her father committed suicide while she was still in law school because he had drained his insurance company’s capital reserves, her “well-cushioned life vanished,” as she said. She moved into cheaper digs in Adams Morgan, then a frontier neighborhood in Washington, and used her law books as collateral to take out a loan so her youngest brother could stay in boarding school.

“She’s one tough cookie,” Mr. Thomas said. “She’s seen a lot, coming from the South, and she also realizes how fortunate she is to have had the family she had. Maybe that’s why she’s so resilient and so voracious.”

Ms. Cooper Cafritz also, famously, collects people. She has dozens of godchildren and has unofficially fostered dozens more. She ticked off the names of four or five young adults she’s mentoring now, including a former female gang member from “a blasphemously dysfunctional family,” whom she read about in The Washington Post and who needed $8,000 for her college tuition (Ms. Cooper Cafritz paid that bill). There was also a formerly homeless gay teenager now at Brooklyn College who has just been accepted into Management Leadership of Tomorrow, a leadership coaching program for minorities started by John Rice, brother of Susan Rice, the national security adviser, both of whom are Ms. Cooper Cafritz’s godchildren.

Cooper, who is now 23, wandered in and gently placed the hunter’s cap he was wearing on his mother’s head.

“We’ve changed a lot about ourselves, I think,” he said of their lives post-fire. “The family parties are smaller, but the connections are deeper.”

Still, on Christmas Eve there were 125 guests, including a few musicians from Ellington. By midnight everyone over 30 had left, Ms. Cooper Cafritz said, and the party heated up: “The carols were enlivened. We had a few more rounds of songs.”

It very much felt like home that night, she added. “And it felt like home when Cooper was sitting here,” she said, patting the sofa. (Cooper, who lives nearby, had left to take Ms. Cooper Cafritz’s puppy, Ace, for a walk.) “As things started falling together, I have felt a greater and greater affinity for this place. I really do like it here. I like the way it’s ended up. But I do find myself occasionally saying, ‘Is this yours?’ ”