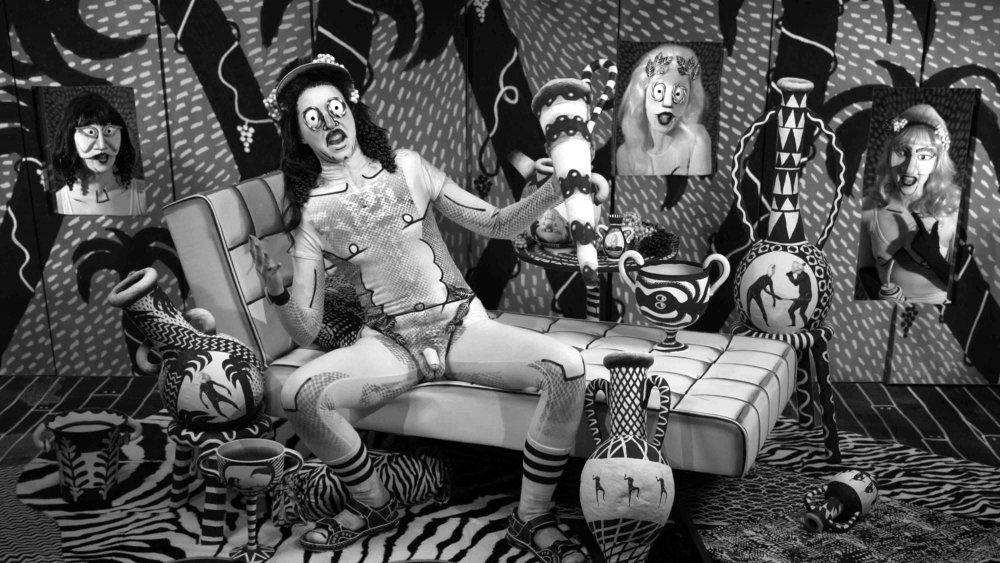 Yesterday, video artist Mary Reid Kelley was awarded one of 23 prestigious MacArthur Fellowships, which comes with a sweet “no strings attached” grant of $625,000. (Congratulations, Mary!)

The 37-year-old New York-based artist creates absurd black-and-white videos from scratch with her husband and collaborator Patrick Kelley. Together, they re-stage moments of trauma, lust, taboo and betrayal throughout history ― both real and mythologized ― through the lens of women’s roles and gender relations.

Each of Kelley’s films takes approximately one year to make. First, the artist writes the scripts, dense with puns, wordplay and innuendo, playfully and analytically reimagining historical events or literary texts. Then, she fashions an entire black-and-white world by hand, transforming a historical era or literary realm into a tripped-out baroque diorama sprung to life.

Next, Kelley disguises herself from head to toe, transforming her face into a variety of flattened masks that are part Cubist, part haunted puppet show. Patrick films each work, and Kelley plays each and every role. Together, they edit the piece in post-production. The resulting films are strange little glimpses of parallel worlds in which people look different, talk differently and move differently than in ours. And yet, in this monochromatic, clunky, hallucinatory sphere, the way men and women interact is really quite familiar.

We reached out to Kelley to learn more about her past work and future plans.

Your work involves some intense knowledge of history and literature. Were these passions of yours before you began integrating them into your artistic practice?

I was definitely interested in history and literature, but I didn’t integrate them into my painting practice. I thought of it as something separate. This didn’t change until I started working in video. With video, I found I could use a time-based medium to integrate visual work and writing. Video provided a way to unite all these different facets.

Was there a particular text or historical event that first inspired you to incorporate elements of it into your work?

When I got started, I was inspired by poems and memoirs written during the first World War by people who were actually experiencing the war ― the so called “trench poets.” But there was a much wider world of learning and versifying that I was interested in.

Your work addresses serious topics in history and literature with rhyme, wordplay and plenty of absurdity. What motivated you to address serious topics with an experimental sense of humor?

It was really the writers and creators who were alive at the beginning of the 20th century and witnessed the first World War who were influences. What struck me was, very often, these people who had experienced very traumatic events, whether fighting in the war or losing family to the war, would use humor to process what must have been trauma of a very serious kind.

Reading these works ― poems by Siegfried Sassoon and Robert Graves ― they are very funny and also very critical. I think it’s important that they’re both. The humor and criticality plays hand-in-hand. So, it’s a model I didn’t make up. I saw it in action, employed by people seeing very sad things. They were inventing new literary forms and approaches to describe trauma and betrayal.

Are there certain figures in art or pop culture today, aside from yourself, you see navigating this space between history and humor?

I’ll tell you about one semi-obscure piece of WWI literature — The Wiper’s Times. It was a trench magazine, published in the middle of the war by active duty soldiers on the Western front in Belgium. It was essentially a humor magazine, like MAD magazine. It was a parody of British newspapers at the time, like the Daily Mail.

It was a very direct forbearer to something like “The Colbert Report.” Colbert, there, is directly parodying a form of journalism. Through his parody, he is addressing very serious things ― the war, hypocrisy of public figures, even criticizing himself. Those are real models for me. They’re not fine art. One was a newspaper published by soldiers for soldiers, and Colbert is this major media, broadly popular product.

For your work to be recognized this year, there is clearly something about it that resonates very strongly with the current moment. Do you think viewers are hungry for art with women at the center?

My work almost always has a woman as the central character. This is partly because I play almost all of the roles myself, although I usually am also playing male characters. My work is about women, but it’s also about traditional gender roles and making fun of them, often through me playing a man, playing a woman or playing a monster. Being lighthearted with gender roles, that’s never going to go away. It’s going to evolve, and we’ve seen things evolve. I majored in women’s studies when I was in undergrad. That type of direction in academia has really broadened to include LGBTQ studies, queer studies, queer theory. I’m really glad my work is being recognized at this time so it can be in dialogue with that conversation.

You touched upon the subversive power of role-play in your work. Can you talk specifically about how makeup and costume, which are often regarded as trivial or superficial, can create change on a more substantial scale?

It’s kind of difficult to point to very many things and say, “Look, this impulse is truly universal for all people and all times.” But I think you really can point to costuming and masks as being universal. Every culture has its own type of theater, its own way of presenting a fictionalized, parallel vision of themselves. I consider my work in makeup and costume to be part of this enormous undertaking that does seem to be part of being human.

In my particular case, even though I’m usually just wearing patches over my eyes, it turns my whole face into a mask. More to the point, it turns my face and whole body into a two-dimensional drawing. The goal is to integrate the figure and its painted look with the background and its painted look. To create a seamless artificial world that is a reflection of reality.

All of your films take place in a handmade alternate sphere. Would you say each of your works takes place in a different world or do you return again and again to the same fictionalized space?

It’s definitely different places every time. Right now, Pat and I are deciding what we’re going to do next. In a way, it is kind of a matter of choosing where we want to go. One of the first decisions we make is: When are we? Are we in the future, in the past? If in the past, are we in the mythological past or the historical past? That determines a lot of where we go, which world we end up in. It’s great to be able to choose.

You mentioned your partner and collaborator Patrick Kelley, who produces all your films. You’ve also spoken about how, as a feminist artist, recognizing artistic collaboration is important to you. Does it feel strange to be receiving this recognition alone? Do you think this reflects the art world’s tendency to portray artists as lone actors?

We’ve got basically three interlocking situations here. The first is the MacArthur Foundation, and giving grants to individuals is what they do. They only give grants to a single person and they talk extensively in their materials about why that is. Patrick and I understand that, and it meant a lot to us that they mentioned that the work is made as part of a collaboration. Practically speaking, the grant is for both of us. It’s an incredibly liberating financial gift that we’re going to benefit from together.

The art world has a definite lag on recognizing collaboration. If you look at the film world, even the avant garde film world, they know films are made by teams of people. But as artists, it is constantly a challenge for us to explain that we’re collaborators and if you’d like us to come talk somewhere, we’d be happy to do it but we both need to come talk. It’s Pat who holds the camera and does the post-production.

And finally, Pat and I are both feminist artists. We make feminist work. It’s as simple as that to us. I do not think the point of feminism is to turn the tables and put male collaborators in the shade. It’s now very known that female collaborators have been in the shade themselves ― like with Elaine de Kooning and Willem de Kooning, for example. But we’re not trying to make a correction. We’re just trying to be honest about the way we make our work. I think feminism is about presenting reality. Feminists are realists.

In your interview with the MacArthur Foundation, you discuss your desire to make a film that was perfect. What would that look like?

Usually, when artists are engaged in actually constructing work, it’s a very concrete process. You are constantly making decisions. Should the dress be black or white? Should there be polka dots? Especially for something like a film, which takes a year to make, it breaks down into thousands of small decisions that all accrue to make the piece a success ― or not.

One thing that would make us feel like we could come closer to the ideal we both have is taking a little more time. I really hope this will help us be able to set our schedule the way we want it a little bit more.