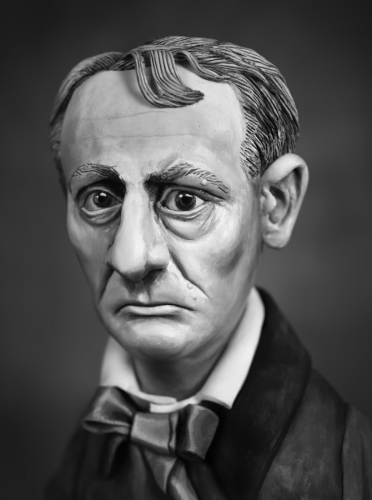 In New York City, museumgoing can be a kind of wandering. The sheer bulk of work, old and new, quickly deflates any idea of “taking it all in”—witness tourists at the Met studiously snapping iPad photos of every painting in a room. Others may prefer a quiet gallery for a breather, and perhaps a chance to examine a work or two a little longer than others. Walter Benjamin describes this conservation of idleness well: “To store time as a battery stores energy: the flâneur.” But Benjamin, who popularized this term for the detached city-stroller, also knew that the freedom of leisure could be deceptive: the flâneur is also the person “who abandons himself to the phantasmagorias of the marketplace.” The city wanderer, he suggests, can easily become an acquisitive browser, “a spy for the capitalists” entranced by the city’s commercial possibilities.

Free movement in a world overflowing with merchandise—how to manage it, how the images we take in change us—is a challenge at the heart of the Jewish Museum’s ambitious show “The Arcades: Contemporary Art and Walter Benjamin,” which brings together contemporary art works inspired, consciously and unconsciously, by Benjamin, one of the twentieth century’s most original and enigmatic thinkers. Benjamin’s “The Work of Art in the Age of Mechanical Reproduction” is an undergraduate art-history staple, but true Benjaminiacs consider his massive, unfinished “Arcades Project” to be the writer’s magnum opus. What began as a short essay on the glass-ceilinged Paris Arcades of the mid-nineteenth century (the modern shopping mall’s ancestor) spiralled out into a warren of notes, citations, and commentaries forming a restless survey of modernity.

Benjamin fled Paris in 1940, fearing Nazi persecution; three months later, after being informed by border authorities that he might be extradited back to occupied France, he committed suicide on the Spanish border. “The Arcades Project,” which he’d left to the author Georges Bataille for safekeeping, never progressed beyond a tangled collage of notes and copied quotes, divided into thirty-six folders known as “convolutes” (from the German “Konvolut,” which means “sheaf” or “bundle”). The subjects of the convolutes run from “Panorama,” “Mirrors,” “Fashion,” and the famous “Flâneur” to the more arcane “Dream City and Dream House, Dreams of the Future, Anthropological Nihilism, Jung.” Within the maze are, among other things, a history of Paris as the first modern cityscape, a Marxist study of spectacular commercialism, and an attempt to think through the way cultures envision the future—the expansive, sometimes muddled riches of a brilliant mind’s passion project.

The range and depth of “The Arcades Project” presents a challenge for a curator: How to prevent the avalanche of theory from burying the art? The curator of the Jewish Museum show, Jens Hoffmann, has put a great deal of effort into finding works that fit into Benjamin’s labyrinth of convolutes. Each convolute is matched with a single art work, turning each piece into a kind of illustration of the concept Benjamin was exploring. Cindy Sherman’s self-portrait as a high-society art donor is paired with convolute titled “The Collector,” suggesting Sherman’s career arc as a collector of personae; Joel Sternfeld’s photos of oddball utopian communities accompany a convolute stuffed with minutiae on the radical socialist Charles Fourier (“Fourier . . . disapproves of the contempt for gastronomy”). While a few facsimile pages of the original project manuscript (now housed in Berlin) are on display at the exhibition’s entrance, most of the heavy lifting here is left to interpretative wall text. For added convolution, each pairing also features a poem of found text by the poet-provocateur Kenneth Goldsmith—his lifted theory and literature (from “Gravity’s Rainbow” to Steven King) squiggles across the wall as an opaque supplement. At times the three-room space feels like a clutter, and some of the smaller pieces on display—two delicate Walker Evans photos, for instance—feel smothered by the copious commentary. But this overload also feels appropriate to Benjamin—more text surrounds us than we can reasonably process.

The most successful associations allow work and concept to illuminate one another. Benjamin’s “Dream City and Dream House,” for instance, is matched with Mike Kelley’s “Mobile Homestead Swag Lamp,” a hanging metal chandelier modelled on the shape of the artist’s childhood home. The work’s play on memory and forgetting (the house literally becomes a source of light, but is also designed to block your view into its brushed metal walls) harmonizes with Benjamin’s interest in dreams and a collective unconscious. Taryn Simon’s “Folder,” featuring collections of same-subject archive photos (swimming pools here, tiled over one another), provides a visual illustration of the aesthetic pleasure in the archivist’s work. Other connections are more playful: Convolute D (“Boredom, Eternal Return”) is matched to Guido van der Werve’s endurance video of the artist running around his house for twelve hours straight. When I visited the exhibit, the work was a hit with the audience, particularly a small boy scurrying around the video’s partition in solidarity.

The longest section of “The Arcades Project,” a convolute investigating the life and work of Charles Baudelaire, is represented in the exhibit by a deliberately cartoonish portrait of the poète maudit by the video artist Mary Reid Kelley. The result is a Claymation castaway, in black and white, its enlarged eyes further exaggerating Baudelaire’s famously dour portrait. Beside the work, Goldsmith contributes the lyrics of the Cure’s “How Beautiful You Are,” a Baudelaire-based dirge about wandering, lovesick, through Parisian streets. But no single image or pop-culture reference can capture how central a character Baudelaire was in Benjamin’s Paris drama: the greatest of flâneurs and a model for the struggle to create art in an ugly, inhospitable urban landscape. The grouping shows some of the limitations of this one-to-one matching, providing a false sense that every section of Benjamin’s project had equal weight, or that its over-all architecture was so scrupulously organized.

There are further complexities that the Jewish Museum’s “Arcades” leaves viewers to consider on their own. Is flânerie still an appropriate model for today’s impatient city walker, who travels in optimized, smartphone-dictated routes to her destination? Has “the phantasmagoria of the marketplace” overtaken us so completely that we’re unable to see our surroundings in any other way? Benjamin famously wrote that “knowledge comes only in lightning flashes. The text is the long roll of thunder that follows.” At its most effective, “The Arcades” exhibit, like the experience of reading Benjamin, feels a little like the reverse. You are set down in a dense and unfamiliar city, and have to work to get your bearings. It can seem aimless, an endless roll of thunder, until you stop to breathe for a moment, to linger on an old word or an image slightly aslant, and—suddenly—you take in a new illumination.