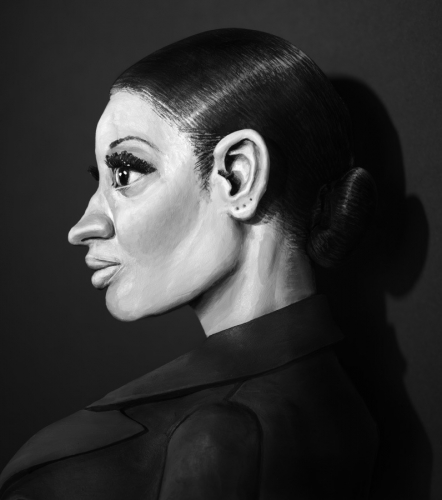 On view at New York's Fredericks & Freiser, the show centers on the artist's latest video, The Thong of Dionysus. It's the third in a trilogy devoted to the Minotaur, the half-man-half-bull of Greek mythology who is the son of a Minoan goddess and a beast.

Nothing is sacred for Reid Kelley (as it was not for the Greeks, whose gods were petty, vain, and conniving). She makes the Minotaur female and has all of her female characters, including the Minotaur's half-sister, Ariadne, and its mother, Pasiphae, sport long, dangling pubic hair. By switching the creature's gender and playing it herself, she told artnet News in a phone interview, she has, like Pablo Picasso before her, made it a vehicle for a kind of self-portrait.

Reid Kelley collaborates on her videos, all in rich black-and-white, with her husband, Pat Kelley; she writes the librettos, dons the costumes, and steps before the camera, while he shoots the videos after digitally creating the backgrounds from Reid Kelley's drawings.

The 9½-minute Thong of Dionysus starts with the titular character extolling the virtues of wine. Reid Kelley's trademark punning starts right up, with animated vases taunting, “You're vial, Dionysus!" to which he retorts, holding up his own vessel, “No, ewer!"

“We wanted a more fantastical visual process, so his world is animated, active, crazy," Pat Kelley told artnet News in a phone call about the video's depiction of the god of wine and ritual madness. "That was really fun because we pulled out more trickery in service of the character."

Soon enough, Reid Kelley's verse ties the isles of Cyclades to “sick ladies," and Dionysus proclaims, “I amphora set of priorities," the first being to “join a drunken sorority." Priapus, the god of male genitalia, meanwhile wanders the labyrinth, with a banana, a fish, a zucchini, and the head of a cock (the feathered kind!) poking out of his jockstrap.

Ariadne, meanwhile, floats in the ocean and washes up on Naxos; when she tries to kill herself with the wrong weapon, a trio of Maenads points out, “That blade's made of rubber, you tragic line flubber / oh why don't you Euripides shit up?"

Just as she's feminized the Minotaur, and emphasized the female characters in the myth, Reid Kelley has long explored the fraught place of women in society. In her 2009 debut show at the gallery, she looked to World War I in one video devoted to a woman working in a munitions factory and another to a nurse at the front; in her 2011 outing here, she rolled back the clock to the mid-19th century, focusing on a Parisian prostitute.

Since that first New York outing, the 36-year-old Reid Kelley, who earned an MFA from Yale, has shown at venues from the Institute of Contemporary Art, Boston, to ZKM Karlsruhe, Germany, and she's won the Rome Prize, a Tiffany award, and a Guggenheim Award. This November, she'll give a performance at London's Tate Modern.

In her newest videos, she reaches back yet farther into history. Her older subject, though, lets her pivot to modern interpreters of ancient tales, like writer Jorge Luis Borges, who penned a short story about the bull-headed beast. He's one of a cast of characters that appears in the new show in photographs of Reid Kelley's painstakingly constructed and painted models of historical and literary figures.

Most of them have in some way treated the Minotaur myth, and their artworks and writing served as resources in Reid Kelley's research. There's Picasso, who identified with the creature's prowess, and Euripides, who wrote a play centered on the ill-fated hybrid. Others, like rappers Lil' Kim and Nicki Minaj, are there for the inspiration they've provided Reid Kelley.

“The most concrete thing I learned from them was how to rhyme on the inside of a line," she told artnet News. “In Anaconda, when Nicki said, ‘Boy toy named Troy, used to live in Detroit,' it was kind of an epiphany. The first lines in Thong of Dionysus, ‘Picture a pitcher bewitched with / an image adapted by jerks," are adapted from a T.S. Eliot poem. So it's a cross between Nicki and T.S. Eliot." In their boasts about their lush lifestyles, too, the rappers are aligned with Dionysus's excesses.

But all of this isn't just about linguistic fun and drinking too much, either, Reid Kelley pointed out. The Greeks were a warring people. And while the Minotaur myth doesn't have any named author, she says, we know enough about it to know the creator's motive. “It was made up by the Athenians, who benefited by the demise of the Minoans," she said, "by saying their queen fucked bulls."

Mary Reid Kelley's “The Thong of Dionysus" is on view through November 14, 2015.