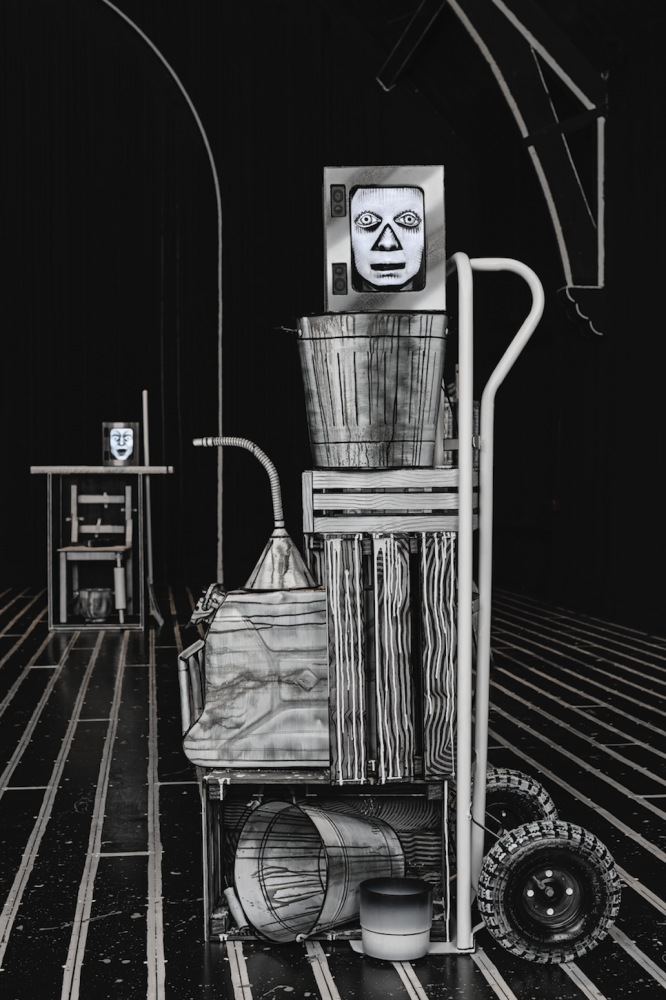 A broken chorus of frenetic voices echoes around the pitched walls of Studio Voltaire. Tiny television sets perch precariously atop anthropomorphic piles of household junk. Broadcast from each screen are graphically rendered female faces, their eyes masked by animated ones made out of clay. Out of their lips spill compulsive, nonsensical mash-ups of wellness maxims and individualist philosophical principles to the rhythmic beat of the antiquarian cento (Latin for “patchwork garment”) poetry format. For their new commission at Studio Voltaire, Mary Reid Kelley and her partner Patrick Kelley have formed an idiosyncratic, alien universe out of an unsteady collage of familiar references, which serves as a mirror for our unstable, fractured present and allows us the distance to examine—from the outside looking in—harmful subconscious “truths” we tell ourselves.

As I enter the Kelleys’ installation Rand/Goop, the culmination of a month-long residency at Studio Voltaire, I feel I’ve wandered onto the set of David Lynch’s Eraserhead (1977)—the experience is more akin to crossing a threshold into a “zone” than casually walking into an exhibition space. The former Methodist church seems to have been passed through a Photoshop filter, rendering it completely in grayscale. The pitched walls are black, while the beams, floorboards, and windows have been outlined and covered in rough washes of white acrylic paint. Six sculptures about the height of a small adult human stand upright, each a precariously balanced assemblage of household objects: a suitcase, a colander, a bedside table. This device of rendering both the human, on-screen characters and the physical objects in the room in janky black-and-white outlines grounds the activity in another dimension. Here is a transportive place between the dead and the living, where humans are flattened, becoming grotesquely cartoonish. The piles of dead objects, on the other hand, seem elevated by this treatment, taking on lives of their own.

The artists are known for their surrealist film installations, often using parody to subvert hypocritical social truths and taboos. A previous work, In the Body of the Sturgeon (2017), shows the bored crew of a World War II submarine performing burlesque for each other while US President Harry Truman announces the bombing of Hiroshima. In this sense, the Kelleys function as drag artists, taking on normal, everyday, historical roles in order to show us that they are just that—roles to be played, but not taken too seriously.1

In Rand/Goop the targets are Ayn Rand, the objectivist philosopher whose individualist principles have greatly influenced Steve Jobs, Elon Musk, and Donald Trump; and Gwyneth Paltrow, who, with her lifestyle website ‘Goop’, has become a figurehead for the commercialization of these ideas, transmuted through the language of wellness and self-care. Both women are symbolic of principles embedded in the Western psyche. In the face of present uncertainties—Brexit, Trump and growing extremism between climate change activists and deniers—individualism and self-care offer the feeling of taking back control of one’s own destiny. In reality it is often a temporary method of soothing one’s anxiety—a form of escapism. In Rand/Goop, the women speak authoritatively from their television sets but their words are nonsensical and, rather than being expressive of any true inner life, seem as though they are being zapped out of them with cattle prods. Their words imply emancipation, but the form betrays an intense fear and lack of agency. The women are, as Reid Kelley puts it, like a “broken Greek chorus.”2 Whereas the purpose of a classical Greek chorus was to drive the narrative action forward, these characters are stuck in a loop, expending energy yet moving nowhere.

For the dialogue Reid Kelley used the cento, a poetic form popular in late antiquity whereby long, serious poems, often on topical subjects, were collaged into short, cheeky rhymes—perversions of the original material. The logic of the collage is the same logic which drives the artists’ universe. Here the functional language of advertisements, motivational speakers and wellness gurus become abstracted through this collage process, creating a parodic caricature of their original forms. Reid Kelley’s painterly background is evident here in her pillaging of references for their aesthetic qualities, severing them from their previous function and mosaicking them together. “Real nonsense is not devoid of sense, it is a parody of sense,” she explains. The result is the eerie sensation of watching something you are intimately familiar with, but from shaky ground—as if watching our world from an alien planet. I do not belong in this black-and-white universe, but I can’t help feeling as though I too have been passed through the filter.

Indeed, one the most disorienting and successful aspects of the exhibition is that by entering the space we immediately become part of a scene. Surrounded by these familiar-unfamiliar anthropomorphic creatures imploring us that “getting emotional waste out of your gym bag is a nightmare of cognition,” we uncomfortably recognize ourselves as players. Following the cue of the cento, whereby the “higher,” authoritative source is subverted through collage, Mary Reid Kelley and Patrick Kelley wear our subconscious social tyrannies as drag and push them to the point of pantomime, giving us the distance to realize their problematics, then perhaps even the space to laugh at them. Much like an actor realizing that he is not truly Macbeth but merely imitating his words and actions, perhaps a way of discovering ourselves in this overloaded haze of information is to embrace the fact that we are merely playing the roles we’re given. Underneath it all we are fragmented, uncertain, and human.

1. Mary Reid Kelley invariably plays all of the characters in their films. It seems a crucial aspect of the Kelleys work that what we are in fact witnessing is one ‘self’ being divided into many selves, rather than a cast of performers. In a conversation with the Hammer Museum, she elaborates “We all contain multiple selves. There’s a part of me that’s capable of writing this stuff that embarrasses some of my alternate selves, and I know those alternate selves must be totally embarrassed for the work to be any good.” See: https://www.youtube.com/watch?v=-JRZwJgn5gg.

2. “Mary Reid Kelley and Patrick Kelley in Conversation with Harry Thorne,” talk held at Studio Voltaire, London, July 6, 2019. All subsequent quotes are from this conversation unless otherwise indicated.

at Studio Voltaire, London
until 6 October 2019