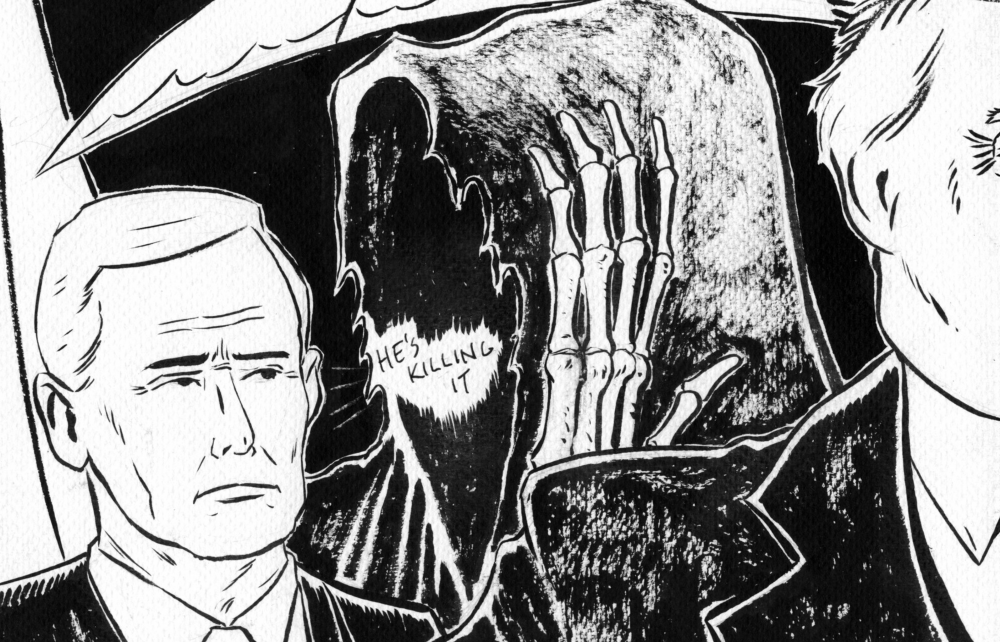 Like William Hogarth, the artist Mark Thomas Gibson is best known for his black and white comic-strip inspired pictures of “modern moral subjects”; like the English caricaturist, much of his work pokes vicious fun at the excesses of contemporary politics. According to Gibson, his particular outlook on American culture is derived from his multipartite point of view as an artist: he is a black male, a university professor, an American history buff, and a comic book aficionado. These myriad and often colliding perspectives fuel his pen and ink explorations, revealing visions of a violent, nightmarish and dystopic America. In all of the artworks on this site—many of which were made since March of 2020—Gibson’s colliding perspectives shine a light on America’s current grim social realities. Like much great satire, they also implicate the viewer in the dystopia they portend, reminding us that, though absolutely everything is at stake, we are all still in this narrative together.

“When COVID-19 hit America, we slowly and begrudgingly slowed down. American culture instructs us to go to work sick, to toughen up even when in immense pain. This myth of strength through perseverance is the misguided trope used to keep the gears of our economy going. If we were sane, if we were not so actively lied to, the gears would seize and say ‘Enough!’

“We have reached another crucial crossroads in the ongoing fight toward freedom. Once again, we are renouncing racism and economic disparity en masse. I purposefully choose to make my work within the mode of graphic imagery, because it cannot be misconstrued or repurposed easily. The context is fixed, communicates clearly, and it is a vehicle to share my opinion on this administration, society at large, and the individuals who seek to oppress us.”