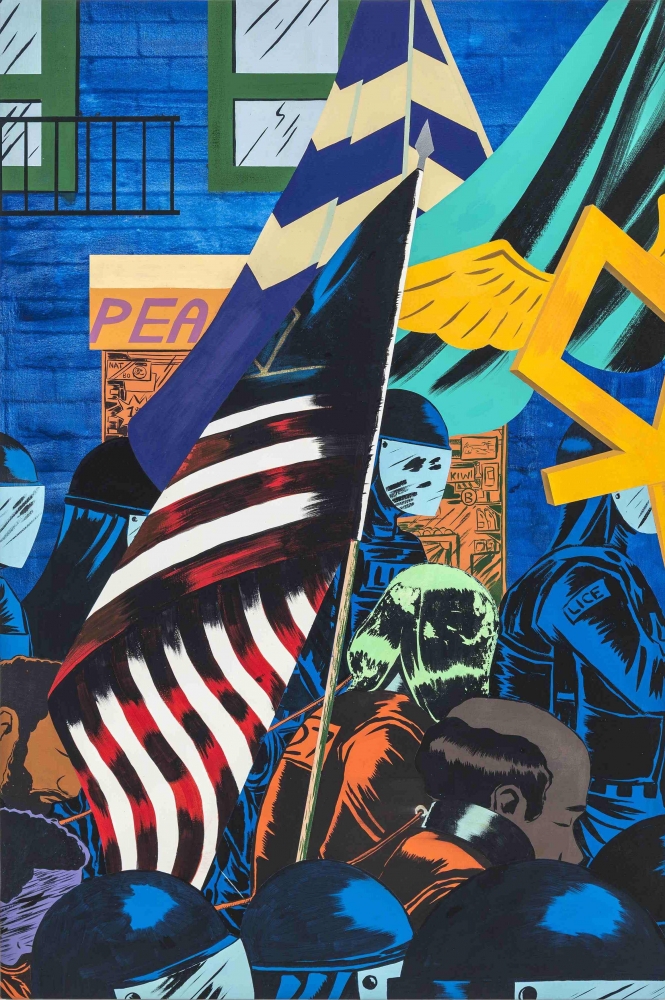 A new wave of ﬁgurative painting in recent New York exhibitions prompts critical questions about which bodies we depict, for whom and to what end

Painting has always seemed torn between an inward and an outward gaze: between vision and perception, between our dreams and the concrete, highly politicized conditions framing our comprehension of the world and what it might become. Today is no diﬀerent. After a period in which the medium has been dominated by process-based abstraction, the ﬁgure – and representation with it – is ascendant again. But, if the 1990s and 2000s saw artists such as John Currin distorting classical form while others, following Gerhard Richter, mimicked photography, today’s figuration displays a distinctly different character. Gone, for the most part, are the echoes of old masters; gone, too, are the blurs of photorealism. What takes their place, instead, is a highly idiosyncratic approach ﬁltered through pronounced aﬀect, comic-book and sci-ﬁ aesthetics, dreamy narratives and an eagerness to engage with our political moment without forfeiting the sensuousness of the medium.

In New York, these tendencies appeared in several shows this autumn, as figurative painting prevailed in openings across the city. At Michael Werner Gallery, Peter Doig presented works in his signature ethereal style. Many of these render the spaces and people of Trinidad, where the artist spent his childhood and has lived since 2002. In paintings and works on paper, Doig converges observation, photographic reference and memory, producing woozy impressions of an idyll seemingly untouched by strife. Two Trees (2017) shows three ﬁgures before a large, tree-framed sunset: two of them appear to play street hockey while another films the scene. Meanwhile, the towering Red Man (Sings Calypso) (2017) depicts a man crooning on the beach as a blue figure wrestles with a serpent on the sand behind him – a nod to Nicolas Poussin’s Landscape with a Man Killed by a Snake (c.1648). To impose such concrete narratives, however, may be a disservice. These works are reveries, their thin lakes of transparent colour alternating with dense encrustations of paint in oily migrations.

Doig’s style may hypnotize painters and collectors alike (he was once the world’s most expensive living painter), but he isn’t alone in this airy yet materially dense approach. Alastair Mackinven’s new paintings recall the work of Paul Delvaux, Max Ernst and Odilon Redon. But the untitled canvases in his debut exhibition at Reena Spaulings Fine Art, with their craggy surfaces and doubled, phantasmatic ﬁgures, also evince a more idiosyncratic approach. Indeed, the show’s press release included a photo of Mackinven hallucinating, and recounted a series of equally trippy visions. Untitled (2017) depicts a green figure emerging from a reclining nude. Painted on a textured ground, a face with hollow eyes appears in the overlapping forms. Is it a ghost? An astral form? In another painting, a woman grows, Sphinx-like, out of the remains of her pallid double into a landscape of large ﬂowers. Combining such chimerical elements with emphatically concrete qualities, Mackinven’s veils of luxurious colour conjure everything from symbolism to Jungian archetypes to the writings of Carlos Castaneda.

A dreamlike tone, albeit with a political edge, also pervades Lisa Brice’s work. The artist’s latest paintings in ‘Boundary Girl’ at Salon 94 display her sustained interest in the female body. Frequently drawn from images of Trinidad – which Brice, like Doig, calls her second home – her women frolic, display themselves, undress. But, although Brice sometimes evokes the motif of the brothel and the male voyeurism implicit in this subject, her heroines are self-possessed, empowered, appearing and performing mostly to themselves. The diaphanous-blue Between This and That (2017) references Édouard Manet, Pablo Picasso and Félix Vallotton – Gertrude Stein can be spied surveilling the scene – yet one of the women also sports the signature ‘pussyhat’ from this year’s global Women’s March to protest the inauguration of President Donald Trump. No Bare Back, After Embah (2017) glows, instead, with saturated red washes. It depicts a figure, modelled on a picture of the rapper Nicki Minaj, provocatively displaying herself while other women dance, smoke and drink Stag Beer – the ‘men’s beer’ of Trinidad. Lest we gawk at the bodies on display, a hissing cat in the foreground recalls equally Manet’s Olympia (1863) and ‘Pussy Grabs Back’ agitprop.

Like Brice and other artists driven by a psychologically charged vision coupled with a growing sense of political urgency, Celeste Dupuy-Spencer can be said to update Charles Baudelaire’s call for a ‘painting of modern life’. A case in point: her recent show at Marlborough Contemporary included images of friends, family, Hurricane Katrina and country music legends. Painting with hurried, unselfconscious strokes, Dupuy-Spencer casts a perspicacious eye on (mostly) white, working-class people, rendering them with empathy, humour and scalding satire. In R. DiMeo III (2017) – a painting of a man holding a fawn – the artist delicately aligns the sitter’s gesture with his open and familiar gaze. In Sarah (2017), she flattens forms and lets the brush search for tender expression in the eyes and ruddy complexions of two queer lovers captured in intimate repose. But Dupuy-Spencer also paints the headlines. Not Today Satan (2017) pictures a gaggle of Boschian demons shadowing a police car, its ‘Protect and Serve’ slogan rendered absurd by consistent police brutality, while Durham, August 14, 2017 (2017) shows a crumpled Confederate statue, highlighting the recent racist violence in Charlottesville, Virginia.

Such politicized gazing beyond the studio walls also inspires Jordan Casteel’s moving portraits. The artist focuses almost exclusively on black men, whom she photographs on Harlem streets and then paints in sumptuous, vibrant colour. Often, their skin reflects the ambient chroma of the background, glowing with acidic orange or olive green while street signs and clothing logos offer wry internal commentary. But, if the figures in Casteel’s portraits are sometimes bathed in artificial light, they are also animated by an empathetic glow – traces of the relationships the artist develops with her sitters. In Harold (2017) – exhibited in her recent solo show at Casey Kaplan – an older man turns to face us from his plastic chair as he and a younger man are illuminated by store windows. Similarly, Q (2017) directly meets our gaze while an image of Biggie Smalls on his sweatshirt poses in a playful mise en abyme. ‘What does it mean to offer someone visibility in a world that is constantly rendering their humanity invisible?’ Casteel once pondered. Her answer lies in portraits that radiate generosity on the part of sitter and artist alike, wedding an urgent political project with painting that forges intimacy between strangers.

Of course, political horizons are fuelled as much by imagination as by lived experience. It’s no surprise, then, that some painters increasingly quote the aesthetics of comic books and science fiction for the imaginative ‘world-building’ and social critique these forms offer. The forefather of such pop-inspired approaches may be Peter Saul, whose Technicolor antics were recently on view at Mary Boone Gallery, but new protagonists have also entered the scene. Emily Mae Smith’s paintings feature a mischievous avatar modelled on the broom from Disney’s Fantasia (1940); this animistic character stands in, by turns, for a paintbrush, a symbol for feminine domestic labour and a prankster revising male-dominated art history. Smith’s meticulously painted works – equal parts retro sci-fi, art-historical romp and pointed critique – masterfully alternate glazes, smooth gradients and hard-edged precision, portraying this surrogate in ever-elaborate contexts. In Bathers (2017) – included in Smith’s recent show at Simone Subal Gallery – this whimsical heroine is incarnated three times as mermaids disposed like William-Adolphe Bouguereau’s nudes or Caspar David Friedrich’s moon-watchers. In The Riddle (2017) – a riff on Jean-Auguste-Dominique Ingres’s Oedipus and Sphinx (1808–27) – she queries the winged oracle while holding a lance-like brush. Meanwhile, The Other End (2017) presents a cornucopia of deliciously painted fruit fit for an apocalyptic feast. However, Smith’s eschatological thoughts are never far from a utopian imagination; Deus (2017) echoes Hajime Sorayama’s 1980s illustrations in its depiction of a dark metallic breast against a sunrise – a sign of better, posthuman futures to come.

For Mark Thomas Gibson, the quest for utopia likewise remains a necessary collective project. Weaving an allusive narrative drawn from his corresponding graphic novel, Gibson works in a vibrant comic-book style, presenting images both ominous and hopeful. In ‘Early Retirement’, his recent exhibition at Fredericks & Freiser, Procession 1 (2017) shows a sombre protest flanked by Death-like, helmeted police, while Library 1 (2017) pictures an enigmatic trove consisting of, among other things, a spear, a sword, a raven and what may be Gibson’s own influences: volumes by Dante Alighieri, Octavia E. Butler, Samuel R. Delany, Toni Morrison and others fill the room as a portentous wind blows through the fireplace. Is it a sign of crisis? Of transformation? The resounding drum roll in Beat Down (2017) might signal such changes. However, as a baleful aside, the virtuosic Trump’s Entry into Washington (2017) presents a bestial Trump triumphantly presiding over a hoard of supporters, armies of police, KKK members and prisoners – who include his own staff. As in much science fiction, the work shows one timeline of many; it’s up to us to alter the course.

Undeniably, this current focus on figuration carries with it the potential risk of re-investing the figure with ‘timeless values’ – an appeal to art-historical constants in a moment of profound uncertainty. At its best, however, it prompts critical questions concerning which bodies we depict, for whom and to what end. In this regard, there is a politics in the figure that haunts every act of recognition. Abstraction never voids this, of course, but such politics and complex questions are a welcome return as today’s painting attempts to reconcile dreams, lived histories and the urgent task of modelling new futures.