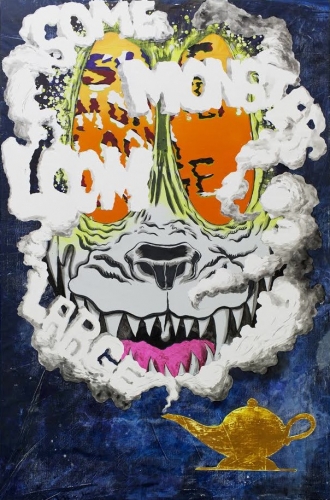 Mark Gibson is a New York based artist whose satirical depictions of war deconstruct American History and the way in which history impacts current attitudes and beliefs. Whitehot sat down with Mr. Gibson for the following conversation.

Irena Jurek: By fusing historical references with elements of science fiction in your work you create a more fluid idea of time, and you show how much our past influences our present.

Mark Gibson: That’s a launching off point. Science fiction allows for us to actually have the harder conversations about what it is we are dealing with in our reality.

IJ: You view the story of slavery in America as an alien abduction story?

MG: It’s the story of a group of people who are living their lives, yes, there’s war, yes, there’s slavery, yes, there are all these other things that are happening inside their societies, but the reason it’s an alien abduction story because another group of people come, that don’t look like us, that don’t seem like us, they speak a different language, they come on giant ships, they capture people, and in capturing they change them. They turn from being humans, to utilitarian objects; they become tools. So then post-slavery you have people who have been considered utilitarian objects, tools, then having to deal with the fact that they’re now humans again.

IJ: It’s hard to even begin to imagine how people became acclimated into becoming free.

MG: My parents lived in American apartheid. That’s what segregation is in America. There is no difference between the apartheid that was happening in here and that was happening in South Africa. We don’t think about these things, we don’t think about that only fifty or sixty years have passed since that. There are people who were born in the segregated south who are just sixty years old. You know, they’re not eighty, they’re not a hundred…

IJ: You’ve created an entire body of work just dedicated to the Battle of the Alamo. What led you to take interest in that battle specifically?

MG: What happens in the Battle of the Alamo for Americans is a cry of victimhood. About those who were standing up against an oppressive force in a foreign land and how their actions, even though they all died, is a true sense of patriotism and –

MG: Heroicism and romanticism, exactly. The thing is that these individuals were no longer American citizens, they had all given up their American status to become Mexicans so they could land grab over there. Then they wanted the help of the American government to step in and help them keep their land grab. At the time, Andrew Jackson, didn’t want to be involved in the war, since he had problems with France. Jackson loved war, but he decided that this was one bridge too far. The way we tell the story is that these guys valiantly defended the space, which they actually took over from the Mexican government. They were holding a strategic space that they felt that they could defend from the Mexican government and they died. We tell the story that every man fought and died for this ideal. Davy Crockett actually surrendered at the Alamo, but if you tell the story that way, then it sounds like he’s a coward.

IJ: History is always like that. It’s always steeped in lies. It’s interesting that you’re using such an apocryphal drawing form to accentuate that.

MG: If it’s already a lie, if it’s already a concept, if there’s always this ever changing, mutating form, then why not speak to that mutation of the virus, after looking at how it manipulates and changes our view? To contemporize it, I think about what we’re doing in other countries with wars and weapons of mass destruction. How we took the idea of an action of violence towards us- that idea of victimhood, then grew and became the idea of possibly becoming a victim to other people, and what they could do and their intentions.

IJ: What you’re critiquing in your work is this Hemingway ideal. I don’t know if you’re familiar with The Old Man and the Sea?

IJ: The old man catches his marlin, then he fights the sharks.

MG: And they’re eating away at the marlin.

IJ: And he comes home beaten and bruised, but he’s still a hero. And that’s  like the Alamo!

IJ: He loses, but he’s still a hero because he fought the heroic battle.

MG: Yes, he fought for what he believed in.

IJ: Hemingway is coming from this idea of Manifest Destiny. It’s very similar to the Alamo. The two hundred people who were guarding the fort and the army of the thousands that came.

MG: The truth is that they were stuck. The people who were at the Alamo were defending two canons, and they knew that these canons were going to be used against them by the Mexican government at a later date. That was it. Instead of just damaging the canon, they decided that they needed the canon. So two hundred and twenty people died because of a canon. That’s the Alamo!

IJ: It’s funny how it’s generally depicted as being so glamorous.

MG: When I think about using glitter and things that dazzle the eye, I was think about how to make something beautiful and alluring.

MG: Exactly. Everything about glitter is cheap. This idea of covering the fanged monster in glitter, and to have beauty attached to the idea of empire. Handsome conquerors. The idea that you see the ships and the boats and these massive displays of power. There is something beautiful about it, but at the same time it’s war. It’s violent.

IJ: Patriotism also relies on this sort of lie. If you think of olden times, “God is on our side, God is against their army!”

MG: Exactly. Or in defense of the king.

IJ: It makes me think of All Is Quiet on the Western Front. The German youths who are full of all these ideals, until they go to the warfront and it’s a very different story.

MG: When we think of what the realities are, and the stories we tell ourselves, that the atrocities we’ve committed have a noble end. It’s always just been about power.

IJ: It’s a part of our nature. There’s never going to be world peace.

MG: We do not have the ability for proper foresight. We are creatures that tend to make decisions based on reactionary thinking rather than possibilities based in the future. WM