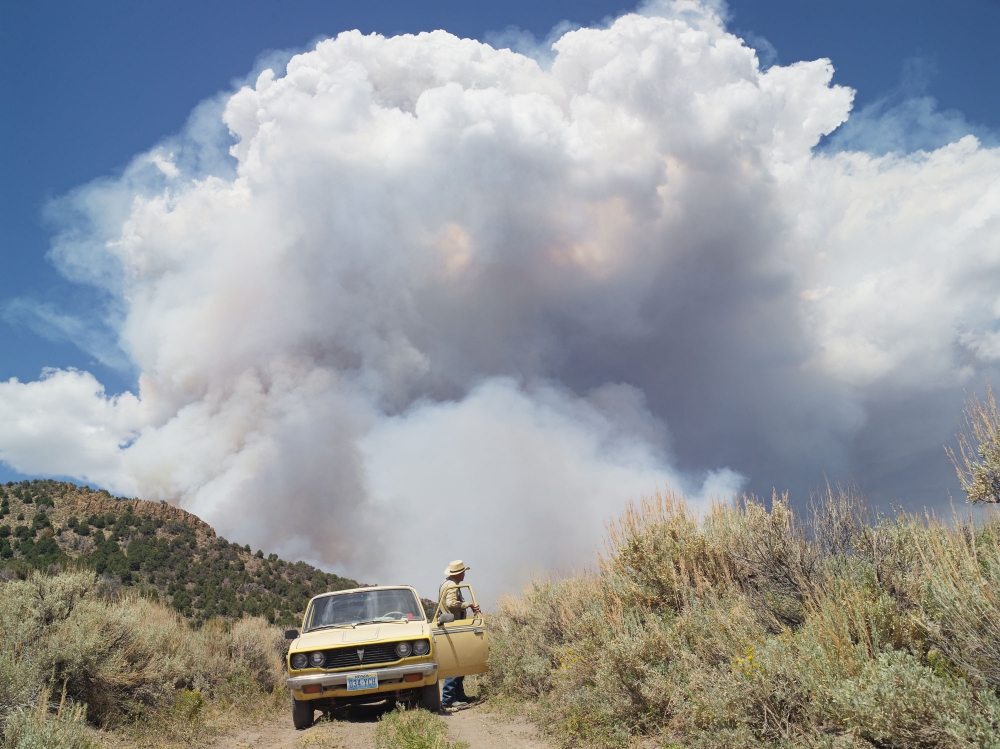 In the late fall of 2009, the photographer Lucas Foglia set out on a rural road in Wyoming and got caught up in the vastness of the land.

For Mr. Foglia, raised on a small farm on Long Island, the landscape he encountered was “bigger and harsher” than any he had ever seen. To his right hung a blue sky over acres of snow-covered sagebrush, but straight in front of his car was a storm cloud. Blinded by the snowstorm’s “white wall of cloud,” he skidded off the road.

After about 20 minutes of silence (amplified by the lack of cars and cellphone reception), a pickup truck pulled over. The driver stepped out, grabbed a rope from the back and towed Mr. Foglia’s car back to the road.

Mr. Foglia had an immediate realization.

In the American West, the communities were a “tight net and people took care of each other, because they had to in a place like that,” he said.

Those close networks of individuals, and the lands they lived on, would be the subject of his work for the next four years. The photographs of Texas, New Mexico, Nevada, Idaho, Montana and Wyoming, most of which he took as a graduate student at Yale, eventually became the “Frontcountry” collection, released as a book last year by Nazraeli Press.

Throughout interactions with ranchers, farmers, mining employees and other local residents, he learned that two stories occurred in these areas — and few dealt with his original expectation of “nomadic cowboys on horseback.”

One concerned the wild landscape itself, with its ranchers and farmers. The other was that of the mining and energy development boom, its workers and how that economic force was transforming the landscape.

“People in the towns I visited knew that what was happening there was unbelievable,” he said.

“In the middle of a global recession, while ranchers were fighting the economy and the weather, almost everyone could get a job at the mines,” he said. “Coal, oil and natural gas in Wyoming. Copper and gold in Nevada.”

Yet the nuggets of gold that made the American West famous “have been gone from Nevada for generations.” And in Wyoming, “companies pull 100 barrels of water out of the ground to extract one barrel of oil.” He saw modern technology as it drilled and dug the land, often leaving behind “holes where there used to be mountains.” But he also met many residents who were saved by new opportunities of employment.

“I never dreamed I would be driving a Haulpak truck. Now here I am, a woman miner!” she told him. “I really needed it, being a single mom. I was a beautician for 23 years with no benefits. Now I have them.” At the time of the photograph, Alice was earning a little over $28 an hour, working 12½-hour shifts, from 7 a.m. to 7:30 p.m., rotating days and nights, at 48 hours per week.

Then he met Tommy (Slide 2) in Oasis, Nev. Tommy’s family had been leasing a ranch where a spring helped provide drinking water for the nearby city of Wendover. In 2011, Newmont Mining Corporation purchased the ranch from its previous owner, a small gold company to turn the land into the Long Canyon gold mine.

Mr. Foglia had spent the day with Tommy fixing his truck and then, in beautiful afternoon light, the two drove around the ranch.

“It was the family’s last season on the ranch because the ranch was being turned into a gold mine,” Mr. Foglia said. “And looking at this land, he knows he has to leave, and he said, ‘You want to see me shoot a coyote from the top of that fence pole?’ ” And so he did, but then moments later, Tommy fell off the pole with his gun loaded.

“I expected cowboys to be nomads, herding animals over a wild landscape,” Mr. Foglia said. “I learned pretty quickly that most ranchers had homes with mortgages. I also learned that every mine closes eventually. When a mine closes, the company leaves and people have to move. Miners are the modern-day nomads, following jobs across the country.”

He photographed Thomas and Kimberly swimming in a pond near Jeffrey City, Wyo., a town once home to a uranium mining boom that is now almost abandoned.

“As the Cold War ended, the company closed the mines and everyone moved away, taking their houses with them,” Mr. Foglia said. “On the sides of the roads are rows of cement foundations with front steps leading nowhere. The land in the places I photographed is scarred from previous generations of booms and busts.”

In the time Mr. Foglia spent out West, he saw a lot of changes, each occurring at a different pace. Sometimes, it was the rapid change of weather. Other times, the price of gold, and still other times, it was the homes where people lived, or the jobs that came and went.

All of this left him with one question: “What is going to allow people to continue to live in the rural American West and how are we going to preserve or use the wild land we have left?”