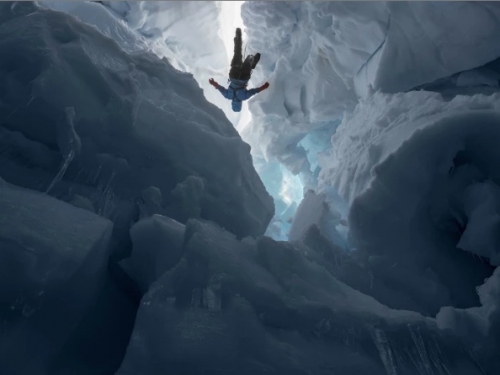 We tend to view the world as though there’s a line drawn through the middle of it, separating the human from the natural. For photographer Lucas Foglia, the line is faint, if present at all, but he uses the meeting point of the two forces it’s meant to divide as the basis for his new collection of work,Human Nature, which will be published in the U.S. in October.

“With photography, I create stories about the conflicting forces of modernity and nature; how we manipulate the Earth to sap its resources, and how some seek to restore it,” Foglia tells Fast Company in an email. In Human Nature, we see a McDonalds covered with a grass roof, and a lush aviary in Singapore enclosed in glass. We see a lumber mill in the basin of evergreen-filled mountains in Oregon; we see a controlled burn eating through the forests in California. The photographs move through cities, forests, farms, deserts, and oceans, documenting the subtle and not-so-subtle traces of human dependence and interference.

Human Nature traces the various ways that we interact with landscapes we think of as “natural,” and our attempts to bring the natural world into the environments we’ve built for ourselves. Throughout all of the images, there’s an obvious tension between the sheer vastness and power of the wilderness and our small attempts to control it: In the midst of a giant conifer forest in Oregon, for example, a lone woodcutter appears as a tiny speck. Looking at that image, you might wonder how humans could possibly make a dent in nature. But Foglia’s photographs force a confrontation with how all of our individual actions–and years of disregard and destruction–have amounted to the state of environmental degradation we’re currently facing. And at the same time, Foglia manages to capture how, despite all of our human-built progress, we’re still dependent on the natural world for our health and livelihoods.

Foglia, whose previous projects focus on people who have left cities and suburbs to live off-grid, and the current economy inthe rural American West, grew up on a small farm around 30 miles east of New York City. A large forest bordered the property, and he remembers playing there as a child while his neighbors ignored it, commuting instead each day into Manhattan. He always had the idea that his family and their farm was shielded by the forces of urbanization and suburbanization swirling just outside. But when Hurricane Sandy flooded the farm and blew down the oldest trees in the nearby forest, Foglia began to reckon with the pervasive reach of those forces. “Scientists linked the storm to climate change caused by human activity,” Foglia says. “I realized that if humans are changing the weather, then there is no place on Earth that is unaltered by people.”

Sandy sparked the idea for Human Nature, and as Foglia began traveling to produce the series, he encountered the visible effects of climate change: melting glaciers, dried-up lands, overflowing rivers. Scientists are familiar with these warning signs, Foglia says, but “amidst all of the news stories and political arguments about climate change, most people don’t know what the process of the science looks like.” He began photographing the researchers whose job it is to measure the air, water, and land to amass the data to back up the changes facing that political scrutiny. He captured a scientist measuring the velocity of a glacier in Juneau, Alaska, and another taking sample readings from the Geysers in California. In a wide-open field in Colorado, he photographed two researchers preparing to launch a weather balloon to measure conditions in the atmosphere.

But Foglia also captured a woman perched on a mountaintop in Utah, hooked up to an EEG machine measuring her cognition in the wild, and the subject of a stress-reduction study seating in a lab in Sweden, staring at a forest through a virtual reality headset. “In a time when Americans spend 93% of their lives indoors, I photographed neuroscientists measuring how time in nature benefits us, using science to encourage people to go outside,” Foglia says.

The tension in Foglia’s images is undeniable. Humans both underappreciate nature in its purest state and exploit its resources to further their own pursuits. Human Naturecaptures mankind and its environment at the time when human activity has begun to eat its own tail by damaging the land from which we take our livelihoods. Foglia’s work is not prescriptive: He’s not using his images to push an agenda or make any sweeping claims. But if we were to look for visual evidence of when our destructive reliance on nature tipped toward too much, his photographs might just be it.