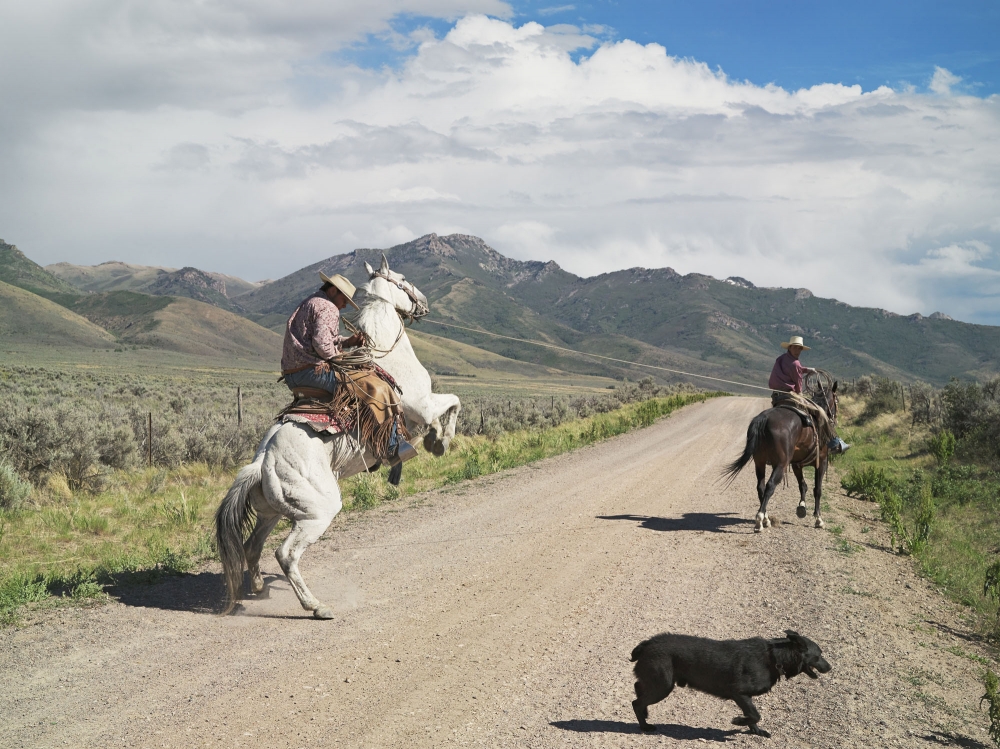 Lucas Foglia’s Frontcountry takes on an American icon – and finds the remaining cowboys’ way of life at risk from the scramble for energy.

“This is the last cowboy song, the end of a hundred year waltz. Voices sound sad as they’re singing along another piece of America’s lost.”

So goes the chorus of Ed Bruce ballad The Last Cowboy, which was released in May 1980. But although their numbers have been dwindling for years, cowboys so still exist, roaming the plains and valleys of the American West as they have done since the late 19th century.

They have had to adapt to 21st century life, though, and where the song has them supplementing their wages “in a market on weekends selling tobacco and beer’, it is now resources, from copper to gold, oil, natural gas and even wind and solar energy, which is competing with their herding and farming activities.

Lucas Foglia approaches this knotty issue by surveying the subtleties of an American icon. He travelled throughout rural Idaho, Montana, Nevada, New Mexico, Texas, and Wyoming between 2006 and 2013, visiting some of the least-populated regions in the United States and finding places in which “the landscape felt bigger, harsher and more remote than anything I had experienced”.

Friends introduced him to ranchers such as Casey, Rowdy, Donnie, Tommy, Stacy, Randy, Annie, Jaime on the way; Foglia spent weeks with them, repeatedly coming back to visit, and slowly found a story – but one of mining, not farming, and its effect on traditional life.

“This little town has nothing,” Randy Stowell told him, while herding cattle on the Big Springs Ranch in Oasis, Nevada. “It’s dying on the vine. But when the company opens a mine here, it’ll bring jobs and make everything in town bigger and better. There are people who want that boost to the community. I’m not one of them. The mine will ruin this mountain and you’ll never find land this beautiful anywhere else.”

The narrative begins with photographs of cowboys and their kin, a short text by Nevada rancher Olan Clifford Teel introducing us to their world. Teel twice begins a thought with “It was quiet until…”, and Foglia’s opening images capture the calm before the storm – in some shots idyllic Marlboro Men command the landscape, in others cowboys quietly go about everyday life. But slowly, picturesque oddities appear on the pages – a pristine soccer field in front of a snowy mountain range; cattle walking in a single file along the road like refugees on an exodus; a dog sniffing large cow entrails on a sunny winter day. Then, as the barren landscapes created by the mines come into view, the quiet serenity gives way to a palpable tension.

Lucas Foglia’s Frontcountry takes on an American icon – and finds the remaining cowboys’ way of life at risk from the scramble for energy.

Foglia neither idealises the cowboys nor reviles the miners, but his images show some of the issues that arise when these two very different industries share the same terrain. “The TS Ranch in Nevada is owned by a subsidiary of Newmont Mining Corporation. The ranch uses water from the company’s nearby gold mines to irrigate alfalfa. The alfalfa hay they grow is fed to over five thousand cattle,” he explains, as an example of mutual support.

“The problem is that the mining goes from boom to bust,” warns Clifford Tell, who now lives next to a gold mine. “I’ve watched the cycle. A company opens a mine near a small town. The mine brings out-of-town workers who need stores, schools and doctors’ offices. The boom ends and the company leaves. The miners leave and the other jobs leave too. The land is scarred and the town is scarred.”

It’s an issue close to Foglia’s heart, after growing up with a family that farmed, canned food and bartered their harvest for goods while malls and supermarkets developed all around. Foglia’s first photobook, the acclaimed A Natural Order, dealt with individuals who had chosen to leave cities and suburbs and live off the grid; his second is devoted to those who grew up in the country and decided to stay. “I keep coming back to the question of how rural communities navigate modernity and how landscape shapes people into who they are,” he says.

He started Frontcountry while completing A Natural Order, which was published in 2012 by Nazraeli Press; working on both books simultaneously helped to “keep each one feeling fresh”, he says, and he chose different styles for each. “In A Natural Order, people were at the forefront of almost every image; in Frontcountry, I wanted to treat everything – people, animals, land – in the same manner,” he explains. “The photographs have a greater depth of field, a wider angle of view and more activity.”

Foglia avoided setting himself a shot list for Frontcountry, drawing instead on his years of conversations with the cowboys and, in doing so, leaving room for surprises to emerge. “For instance, I visited two Peruvian sheepherders, Oscar and Wilson, who trailed across the high desert in Wyoming,” he says. “The photograph I made is of their dogs mating when they are supposed to be guarding sheep.”

Foglia shot 60,000 images but included just 60 in the book, carefully editing out “any photograph that’s didactic, that tells the viewer what to think”. He hopes his more subtle approach will prove more memorable and “provoke people to look, to ask questions and to find their own answers”, and to this end, has provided a list of news sources and maps at the end of the book. Online he’s taken this a step further and linking the title of each photograph to a Google search, both to provide more information and ensures the information stays up to date. As history and his project all too clearly show, nothing is set in stone.