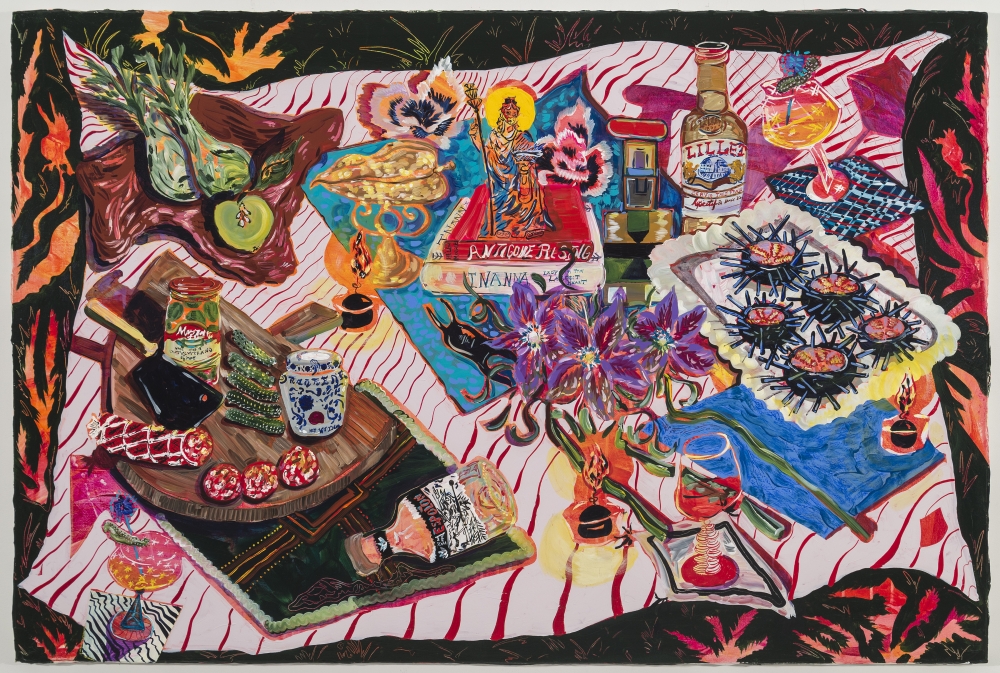 Kate Pincus-Whitney has long been fascinated by the theatricality of shared meals. “For me, the table acts as the stage for the dramas of human life,” she explains of her ongoing series Theater of the Dinner Table. Each large-scale acrylic painting, rendered on a wooden door, is an attempt to gauge the myriad ways the objects we consume and surround ourselves with become part of “our cultural and psychological understanding of self.” At the time she began creating “Dionysian Drinking Games” (2020), Pincus-Whitney was thinking a lot about the  Eleusinian Mysteries, the secretive ancient Greek initiation rituals held yearly by the cult of Demeter and Persephone, as well as about Dionysus, Carl Jung, and the writings of Joseph Campbell. Populated by eccentric accoutrements and brightly colored textiles, the dense painting gestures toward the layered mythologies and rituals she associates with food and the figures mentioned previously.

“Although I consider myself very much an optimist, it’s saddening when you devote all your time and energy making a physical object with your hands, focusing on materiality, and on craft. […] It’s not just about the image of the thing, but the thing itself,” Pincus-Whitney lamented when asked about how she’s navigated the challenges of presenting her work online. “I am very dyslexic and also stereo blind (meaning I cannot see depth), so much of my work formally plays with neurological perception of depth cues, illusion, and materiality which gets lost when viewed solely on screens.” Still, Pincus-Whitney is optimistic about the wider reach enabled by virtual platforms, and hopes her work will inspire viewers to consider more consciously the histories of objects surrounding them.