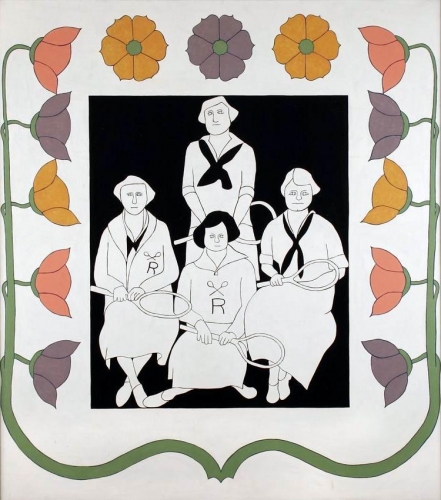 Duco and oil on canvas

John Wesley’s flat, reductive, figurative paintings from the early 1960s represent an alternate Pop vision that not only emphasizes the slick surfaces of postwar consumer culture but also filters the esoteric visual iconography of WASP tribalism through the artist’s own odd psychology. Titled “Important Works from 1961 to 1966,” the sixteen pieces—painting, sculpture, and drawing—that made up this exhibition underscore Wesley’s importance during an early period in his career, namely the years immediately following his move from Los Angeles to New York, when he started exhibiting. As Wesley has consistently painted strange, signature compositions well into the twenty-first century, these works differ little stylistically from the artist’s more mature paintings, suggesting that he arrived on the scene fully formed. Moreover, the exhibition revealed that the uncomfortable political and sexual subtexts that characterize Wesley’s work have been present from the very beginning. In short, his art captures a distinctly American sadism that is as compelling as it is unsettling.

The fleshy, uniform bodies that Wesley paints have as much to do with race and class as they do with desire. In a group of paintings and objects installed in Fredericks & Freiser’s main space, women are depicted in various stages of undress, their limber bodies rendered in saccharine pinks and peaches contrasted against solid grounds. Two human-scale sculptures, each titled Table, both from 1965, feature a variety of female bodies—clothed, pregnant, posed modestly covering private parts—as a classical decorative motif. The sculpture Suitcase, 1964–65, is a small valise painted on all sides with a nude, crouching figure that pushes against the object’s borders. In an even more disquieting painting, Alice, 1965, two identical girls, one clothed and one nude, are painted in profile holding roses. The whiteness of these Caucasian bodies is juxtaposed with symbols of European heritage: Untitled (Notre Dame) and Shield for Kicking Machine, both 1962, are modeled after heraldry. The painting Radcliffe Tennis Team, 1963, makes the WASP narrative even more apparent, depicting a group of women athletes in early-twentieth-century dress, presumably representing the Seven Sisters college of the title.

Although it was likely not the artist’s intention to thematize white privilege, it’s hard to ignore such content when viewing the works today, and the date of their creation—that is, at the height of the civil-rights movement—makes the subtext all the more potent. Yet it is ultimately the artist’s dreamy (nightmarish?) pathos that pushes these subtly misogynist and race-related images to a brutal extreme. In several of these works, Wesley introduces animal forms, such as a camel that is seemingly being fisted by a horse-headed humanoid in Camel, or a gorilla poised in a golfer’s line of fire in Caddy, both 1966. A group of works on paper in the gallery’s second space depict animals formed from the negative space of inky fields; there are dozy-eyed rabbits the size of little girls, and a smiling walrus being caressed by a man holding a giant saw. In these works, Wesley presents acts of seduction haunted by the specter and promise of violence. We are shown that man is the animal most capable of an artful cruelty.