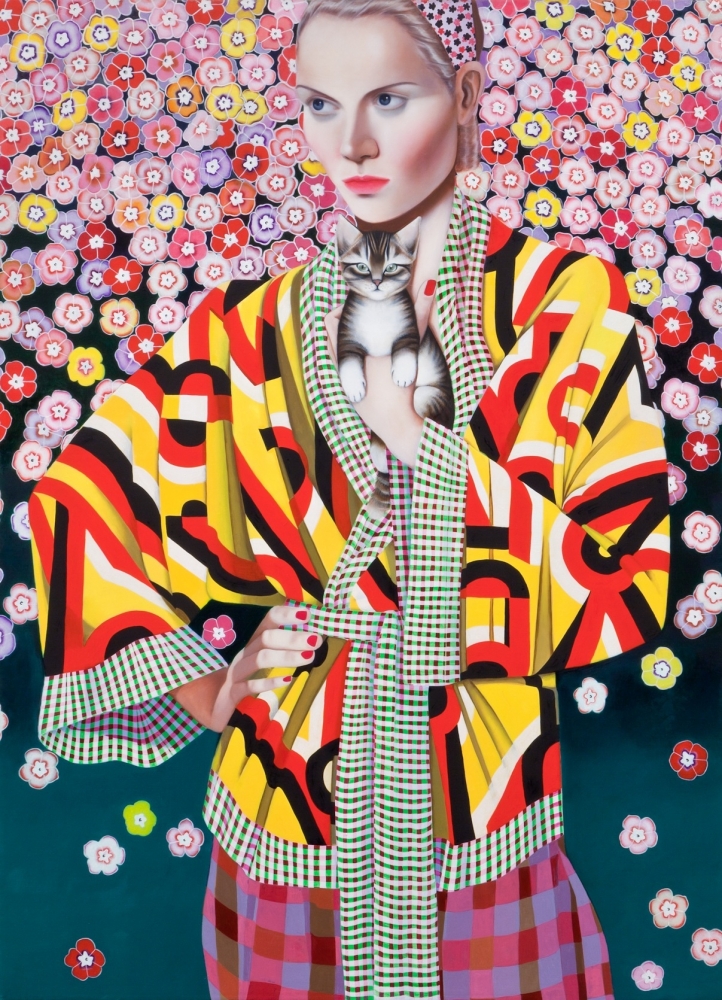 Jocelyn Hobbie is a visual artist based in New York City known for her brilliantly painted canvases of attractive young women in introspective states. She creates a situation of inadvertent voyeurism with the viewer drawn into circumstances where personal judgment becomes subsumed by an overall mood.

How did you hit upon this approach of having these accessory-laden young women looking inward?

The subject of my paintings has been the female figure for a while now, but I see an evolution in what I’m interested in painting and how I go about it. In earlier works I was interested in depicting emotional/psychological states. It was not meant to be explicit or an obvious narrative, but rather very open to whatever story or understanding the viewer might bring to it. They were highly voyeuristic, for example what a woman might be doing in private, caught unaware. The paintings were also very personal. I think I wanted to express something about myself, something about difficult emotions. Even the spaces had a psychological content, often confined or claustrophobic.

As time has passed my focus has shifted a bit from the narrative/psychological content to more formal concerns. Currently the figure acts as a sort of architectural foundation for the painting. It’s my jumping off point for the process of composing the painting, but formal concerns are driving it. I’m not actively looking to depict psychological states, per se, although I am interested in the mood of the picture. Maybe the figure itself is handled more like a straight portrait (which is not to imply I’m ever painting from life). I also don’t want the subject to address the viewer directly, for example by looking back at the viewer, because that adds a different psychological level or component to the painting— not the kind of engagement or confrontation one sees in Manet’s Olympia, for example.

So nowadays the figure is like a building block or a muse that I follow from one step to the next. Everything is emerging out of what the painting presents and demands. More a process of discovery, which I’m finding to be very engaging and enlivening. The space is ambiguous, more like an atmosphere than a specifically depicted space. I’m almost eliminating the space. Of course the figures exist in the paintings and I like the warmth of the human element, it draws me in, gives me something to grasp and build off of. It is also driven by what I feel like painting, and I like to paint a face, hair, hands etc. I used to paint more nudes, but right now I’m into the clothes and other articulated elements because they are opportunities for color & shape & invented patterns. They draw me into the picture in different ways and I hope the same happens for the viewer.

In much of your previous work you explore mother and daughter relationships. Are you finished with this? Why/why not? What drew you to this exploration in the first place?

I wouldn’t say I’m finished with it. Seeing oneself and one’s own mother getting older is rich with a myriad of feelings and I just intuitively wanted to explore that. The combination of intimacy and distance, the complicated stuff. I was also interested in the juxtaposition of the old and young woman both personally and socially, and as it has historically been depicted. Maybe more extreme than that; the juxtaposition of a really decrepit old lady alongside a young, nubile woman. I love Otto Dix’s paintings on that subject. It also springs from our culture, the obsession with youth/aging and the inevitability of aging (if you’re lucky). At one point I went through a period of painting a lot of babies. My friends started having kids so there were lots of babies around all of sudden. I was naturally feeling some pressure regarding it and I guess painting could be a vehicle for exploring all those feelings…

So, one of your influences, as you mentioned, was Otto Dix, who is an artist from the past who seems to resonate with many contemporary New York art lovers. How much of Dix did you absorb? Can you use his style without also taking his philosophical or political stance? Do you feel a philosophical affinity to him?

Dix has been a big influence. It’s about his way of painting. That unsayable art ingredient that I love in his work. There’s both detail, and a muscular force. Of course his paintings are inseparable from the time and political climate they came out of. The 'humanity' he captured is so powerful.

You once mentioned in a talk that you liked the movie Rosemary’s Baby and were inspired as an artist by the acting of Mia Farrow in the film. Why is this film a bit more significant to your work and can you think of other films that are like this for you or your work? Have you referenced female characters in films very often in your art and why?

I think what I respond to about Rosemary’s Baby is that aesthetically it’s quite sunny to look at, but then there’s the underlying darkness of the story. I’m not into horror movies at all, but I’m fascinated by the disconnect between the way something appears and what’s really going on. Everyone does it to a certain extent. I’ve explored that a lot in my paintings. I do find inspiration in movies.

Why are there no men in your pieces?

I would like to paint men, I don’t have a reason for not painting men. In general there are way more paintings of women than men. For me it’s just juicier, more colorful. Maybe I inhabit the painting more. In many cases artists aren’t always aware of why they do what they do, or why it comes out a certain way. Every moment that I’m working is a process of constant decision making, but I can’t say exactly where the decisions come from.

I have a goofy little theory that a work of visual art can either be about social ills/circumstances or personal insight about one’s motives, emotions, cognitive processes etc., but an artist can’t do both at the same time. Do you think your work is political or socially oriented? Is it oriented exclusively toward an exploration of inner states?

I’m not overtly taking on political/social concerns, but the fact that I paint what I paint at this time in history makes it inherently political. How can it be otherwise? Nothing exists in a vacuum. I can paint whatever I want, it’s my choice, that’s political.

Do you still feel that as a female painter you are kind of like a nun?

I just meant that there’s a solitude and discipline that goes along with being the kind of painter I am, it seems nun-like. But it was meant to be taken in a half-joking manner. Obviously I’m not in a nunnery!

In a talk you gave, you mentioned that you went through a bleak period of time that lasted for at least seven years. How bad were your bad days? How did you pull out of them?

I took it day by day, flailing around, searching. It was a lot of experimentation, frustration and throwing things out. I saved almost nothing from that time. Finally one thing led to another. That’s always the best way to work, but in the moment it’s hard to see one’s way out of it.

You went to one of America’s premier art schools (RISD). How effective was your education there? You stated you do a lot intuitively which was never taught to you – what did you get from RISD?

I have mixed feelings about art school. Some people thrive in the school environment, but it wasn’t really for me. That’s probably a personality thing. I mean, my subjects and interests came from myself, not from teachers or interacting with other students. I actually wish I had learned more concrete, practical studio information there, like how to mix mediums and properly stretch a canvas, making grounds and why one method or application of materials is preferable to another, for example, really basic stuff. But I didn’t learn things like that there. It was all trial and error. Being a fine art major was bit of a free for all. I think it was just a place for me to be and begin the idea of being an artist. But I don’t want to sound ungrateful about having the opportunity to be at a reputable school. That’s incredible, but some practical instruction would have been useful— I’m still figuring stuff out to this day technically. Who knows, I probably would have found it boring and reacted against it at the time. It’s always up to oneself to figure it out anyway.

Why the intricate patterns and the flowers? Is this just to arrest our attention?

That kind of intricacy of form and color is how I compose the picture. Those elements started out as details but have kind of exploded out. I would love to make something beautiful. Maybe it’s the poignancy I’m after, that’s my hope.

Your dog has made cameos in your work. I’m guessing your dog functions as a kind of symbolic surrogate for an aspect of the people depicted, but it’s your real dog among fictitious subjects. In one of your paintings your dog has the letter “P” on his dog tag and I – somewhat tongue in cheek – wrote it possibly represented the ancient Greek letter rho, the second letter in the chi-rho combination representing the name of Jesus. I like making over-the-top interpretations - how close was I?

I appreciate your idea, and I welcome it. However, there’s a “P” on his dog tag because his name is Pablo.

When and where is your next show?