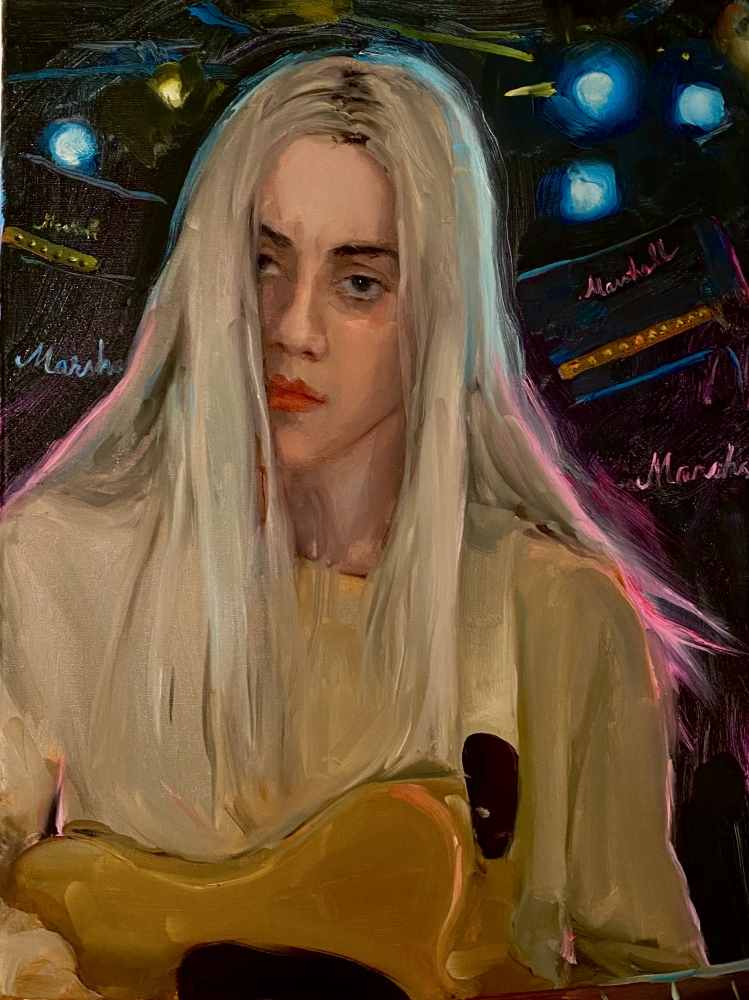 By Felicia Feaster, For the AJC

Athens, Georgia has had a thriving music scene for a long time. And it has also become a nexus for former New Yorkers and Angelenos working in a variety of industries, from design to the visual arts.

Evidence of that trend, Howard’s and Tif Sigfrids are the conjoined gallery projects of painter and former New Yorker Ridley Howard, and former Los Angeles gallerist Tif Sigfrids. Their eponymous spaces share adjoining rooms in a 1,400-square-foot, second-floor gallery with creaky wooden floors and tall windows that flood the space with light.

Perched on a busy corner of Jackson and Broad across from the University of Georgia campus, the gallery opened in 2018 and tends to feature a pipeline of artists from NYC and L.A., many friends or former classmates of Howard’s and Sigfrids. Their current show features Los Angeles-based Becky Kolsrud, whose trippy paintings suggest Matisse colliding with Heinz Edelmann-style Sixties Surrealism. Female-centric, with women’s bodies, faces and psyches taking center stage, Kolsrud’s dreamy works in oil on canvas prove well-matched in their feminine eros with quirky, gorgeously-rendered portraits from New York artist Jenna Gribbon.

Achingly smart and decidedly fun, Gribbon alone is worth a trip to Athens. The artist brings a distinctly snarky, cerebral vantage to what might look — from a distance — like traditional meditations on female beauty. But Gribbon is after something far from simply a reconsideration of portraiture. Her current body of work engages with art history, with female sexuality and a women-centric point of view.

In her portraits at Howard’s, Gribbon depicts friends and girlfriends, outfitting them in the trappings of heroines — and heroes — from literature, music or pop culture. Her expressive painterly technique is as sublime as her sense of humor. The skin of her subjects is otherworldly luminous, their eyes sparkle with the uncanny sentience of a Rubens or Vermeer. Though her painterly skill has the seductive visual punch of a Fragonard or a Sargent, her references are to snapshots, cheap paperbacks, YA chapter-book heroines and other lowbrow sources. A work like “Stephanie as Anne of Avonlea” in oil on linen, which references a book by author Lucy Maud Montgomery, commemorates a lovely woman peering directly at the viewer, a verdant landscape behind her. But Gribbon gooses that timeless moment by painting her subject’s breasts — visible in a see-through top — with nipples the color of Times Square neon that shock your system like a cold shower. The painting is at once reverent and wackadoodle, and the combination is utterly delightful, like a slash of red lipstick on the Venus de Milo. As with director Greta Gerwig’s revisionist “Little Women,” Gribbon both reveres female role models of the past for how they encourage and echo a female-point-of-view, while also reinventing and re-examining them through contemporary eyes.

There’s a saucy, feminist aftertaste to Gribbon’s work, both in her celebration of female heroines and in her gender-bending paintings, like “My Girlfriend as J. Mascis” featuring a woman with the long blonde hair of the Dinosaur Jr frontman posed in front of a wall of Marshall amps. Women are heroes of their own making, trying on identities and roles in Gribbon’s revisionist portraiture. The paintings are celebrations of both Gribbon’s friends and of people, like singer Tori Amos and the children’s book heroine Pollyanna who have served as influences for girls and women.

Despite their streak of silliness, Gribbon’s time-tripping portraits honor how these feisty, adventurous heroines guide young women — gay or straight — as they grow up, serving as signposts in their own identity formation. Gribbon’s uniquely satisfying, cathartic work will undoubtedly remind you of your teenage self, when heroes and heroines were everything and you sampled bits and pieces of yourself from the pop culture you loved.

Bottom line: Smart work from a Los Angeles and a New York artist that examines female subjectivity with skill and humor.