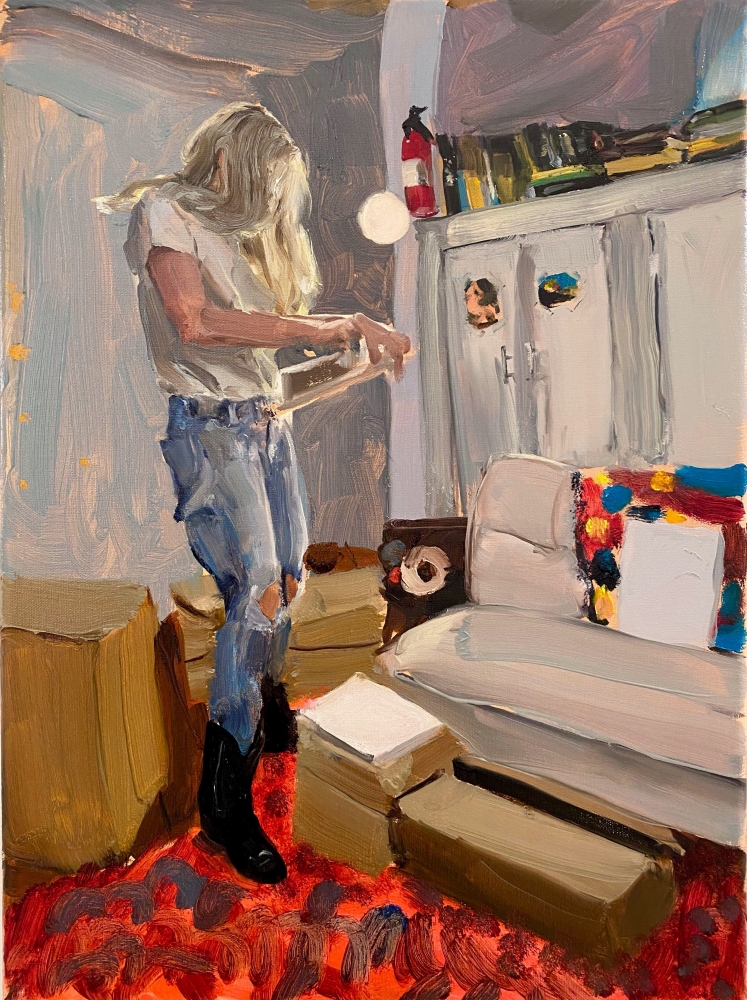 Jenna Gribbon's painting is primarily an aesthetic earthquake. Imprints of a sensual romanticism, her compositions strike with lightning by their immediate effectiveness, their inscription in history and their resolute modernity, level with the tormented beauty of image societies, at the risk of its contradictions. Discover in pictures and words of this American artist born in 1978.

The congruence of Jenna Gribbon's works with the stakes and aesthetics of an era, her mobilization of flattering and dreamlike beauty never ceases to reflect an attention to contemporary gravity, inserting within classic compositions thought collages who outraged them and dragged them into a much more vivid reality where the intensity of perspectives drew power relations into action. With titles of assumed candor that evoke her own intimacy, the artist has patiently constructed for over fifteen years an almanac of "moments" as linked to the history of art as to the history of her own discovery, to the history of the encounter of her work with it, keeping this paradoxical line in tension, which makes it constantly oscillate between dreamlike, anecdote and chronicle enlightened and rational of its time.

After spending a childhood marked by drawing and reading science fiction books and romantic stories, Jenna Gribbon joined the University of Georgia where she developed her painting skills but also her ability to draw inspiration from 'a creative community in which it fully fits. A taste for discovery, sharing and discussion that will continue to irrigate the life and work of this New Yorker by adoption who finds in the frantic pace of the meetings a constant stimulation, even co-founding a "club" of artists from all worlds based on exchange and learning, The Oracle Club. After having made several paintings for the shooting of the film Marie Antoinetteby Sofia Coppola in 2006 and integrated into Jeff Koons' workshop, Jenna Gribbon has been exhibiting her paintings worldwide in collective exhibitions for almost fifteen years. Represented since last year by the New York gallery Fredericks & Freiser where it presents in November 2019 a first solo-show within it.

Like the wrestlers she likes to represent half naked in the Wrestlers series, the influences of artists of all generations are jostling in her works, from John Sargent to Karen Kilimnik, from Fragonard to Thomas Eakins, Manet, Klimt, Matisse, the whirlwind continues to fuel, organizing their joint meeting with millennial subjects which it anchors in contemporary reality. By means of the image, the photographic frame which she uses as a canvas to then perforate the perspectives, Jenna Gribbon deploys a universe in perpetual movement with the allure of symphony of the passions of a being of today, for the world of yesterday, tomorrow and for all those who populate it. Technical quality and obvious efficiency which combine with the artist's freedom, her power of invention and mobilization of archetypes as well as her taste for a form of beauty that does not hide her classicism.

Force all the greater as Gribbon seizes multiple artistic forms to erect her visual stories, nurturing a passion for cinema and, within it, for French directors Jacques Rivette, Jean Cocteau or Agnès Varda whose capacity we know, through the narration, to make "image," to play with the camera as a look that we put on details. And, in her, the details constitute as many narrative threads that vibrate the droop of the pigments, modifying the techniques and styles on certain parts of her body, inventing as many disturbances in the linearity of the staging. Alternating with virtuosity the techniques and methods of representation, sliding from total abstraction to hyperrealism according to the elements it represents on the same body.

This taste for variation that imprints all of her work with multiple faces, deliberately enjoying his freedom to experiment with other styles, other trends that make her production a polycephalous hydra whose identity gets rid of the claims of omniscient author and defeats the virile prejudices of the painter pygmalion. Like the paintings that put her on stage, Jenna Gribbon always seems to relate in her images the impossible memory of a dream of painting in which she would have entered the field. Documenting in her own way these crossings of the mirror, we observe her grappling with other paintings that she inhabits during the time of a creation and that she invites us to populate in our turn. The painting of models becomes the modeling of painted worlds dictating their own laws, which the artist embraces to make their essence.

An opposition appears constant between the indices of tranquility close to romantic painting and the incessant activity of the painter's models. The skits are thus inhabited by constantly active beings, whether cerebral or manifestly physical. When they do not speak, their absorption in thought and the sum of the vanishing lines which magnetize the looks of her silhouettes seem so intense that we believe we are reading the process of a reflection which, if it does not engage us directly, invites us to question ourselves. Where are we when we enter these mansions of the luxuries of another time, the inconsistencies straight out of evanescent dreams? What beauty is it in front of these always sublimated faces of insolent models of beauty of perfection?

It is precisely the part of enjoyable subversion of this work which plays with the codes of aesthetic classicism by having already taken us to the other side of the mirror to observe its reality, the intense activity which runs through the painted lives of men and women who no longer have any "role models" but turn out to be much more subject. The indifference need not be sad and, if the bodies are more than attractive, they are in no case simply "willing" to seduce or thrown into the pasture at the doxa of bourgeois charm, they are only disposed 'to their own enjoyment. Their magnetism is their freedom, their independence. With her series of wrestlers, presented during her exhibition When I Looked At You The Light Changed, her painting depicts a sensitive combination between the precision of bodies deformed by the struggle and the mutation of the decorations which welcome them into disturbing spaces with wobbly perspectives. The struggle, the tension and the twist of the flesh become ways of finding a point of balance in a world where the images, in their abundance, tend to camouflage their unreality, their value of representation.

Mixing modern imagery of intimate sensuality and celestial visions of evanescent flesh, her compositions pervert freedom to pose it at the precise border of malaise; is it a sublimation of the fantasy, of the daily life of the "martyrs" of passion, or more dangerously of a magnetic temptation towards voyeurism, making us all in the position of voyeur, whether or not we find our account?

Here also emerges the taboo of a sexuality that punctuates all meetings, all interactions. From friendly ties to family circles, from group mimics to animal pleasure, Gribbon's subjects continually remind us of the twinning of desire, with this evidence that community is first of all a question of bringing bodies together. The sexual perspective is then only a filter, a trompe-l'oeil which magnetizes it to attract it into the lair of its imagination, using codes specific to the patriarchal culture which it seizes to make them the rules of its emancipation games. Sexuality, celebrated as much as manipulated, staged as much as diverted, does not exhaust anything (just as it does not exhaust anything) these friendships, these exchanges and these struggles which refuse their confinement to the simple desire of the other. Just like her Mutual Pleasure, a swooning dog with the happiness of human caresses, everything is offered here for the pleasure of all, for all.

And in fact, this painting which knows all the codes of image and communication is deployed on social networks with the force and the continuity of an impossible narration, referring to an open life, free and yet never brought to life. Furtively replacing the paradigm of self-fiction, Gribbon realizes for good this desire to make her life a work of art. A precept certainly deviating from the meaning prescribed by Foucault but borrowing, with its audacity and its pragmatism, an oblique whose sincere will to share and put in play of oneself tastes with happiness. Those who do are always right. And their indelicacy, their ability to emancipate themselves from what we expected installs them even more in their strength.

Like this painting which draws from the baroque the ethereal material of contemporary dreams which, them, do not have anything any more fleeing towards the dreams but precisely embrace the aspirations of generations for which political, human and social stakes pass by a active practice of their ideologies, an activism of doing. Behind the slogans and disparate claims (which can sometimes be detected in his paintings), her images concretely transform relationships, existences by erecting a spectrum of reality thought as an experience to be reinvented. In this sense, her productions are worth much more by their ability to capture a spirit of the times than by the will to adhere to any idea whatsoever.

Behind the stigma of fantasy, Jenna Gribbon thus composes a painting full of the concerns and challenges of a reality whose experience, as flattering as it appears at first, marks as much as the passage of the body through the mirror, scarified stinging scars that the shards of glass have dug.