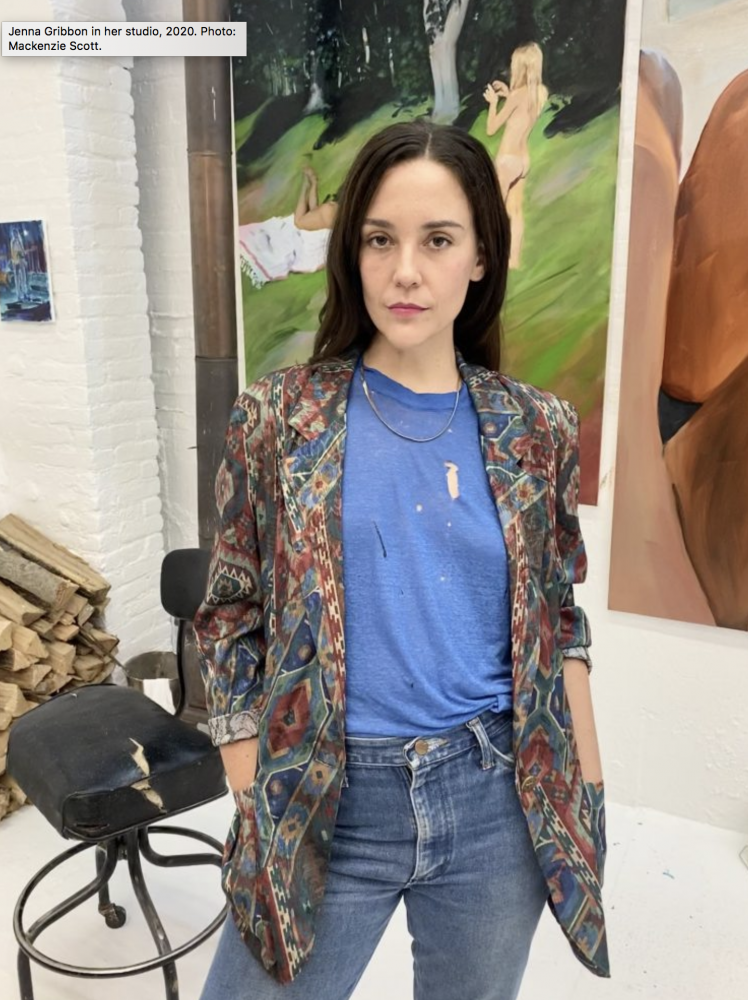 Gribbon is among a generation of figurative painters who traffic in personal imagery shaped by years of sharing their lives online.

At artist Jenna Gribbon’s 2019 show at Fredericks and Freiser in New York, gallery goers squinted at a small canvas from mere inches away. The painting, titled Studio Break, is only 10 inches tall and depicts a tender  moment of foreplay, shown from one of the two nude women’s perspectives.

This is the paradox of Gribbon’s work. The joy in looking comes with a sense that you’re being invited into the most intimate moments of the artist’s life, but just as quickly you’re reminded that you don’t belong there.

“I love trying to make the viewer self-conscious of the fact that they’re consuming this image,” the artist tells Artnet News over video chat in July. “It’s really voyeuristic in nature.”

Gribbon, who is 41, is part of a generation of figurative painters who traffic in radically sincere imagery shaped by years of sharing their lives online. It would be hard to imagine a description of her paintings that doesn’t include the word “intimacy.” Thematically, it’s all over the artist’s work, sometimes explicitly so.

Her show at Fredericks and Freiser combined small-scale portraits like Studio Break with five- and six-foot-tall paintings of women wrestling against imaginary backdrops—and of all of it sold.

As we talk, Gribbon sits in her son’s bedroom in Brooklyn. She’s wearing a faded t-shirt that says “Torres,” which is the name of the indie guitar-rock project of her girlfriend, Mackenzie Scott.

“Mackenzie would be so embarrassed if she knew I was wearing this right now,” Gribbon says, laughing. “She’d be like, ‘Don’t show that!’”

It’s a cute moment, but a telling one too. Scott is a frequent muse for Gribbon’s work, and there’s a self-reflexivity to almost all of her cameos; Scott always seems aware that she’s being watched. Take, for example, a painting in the artist’s new exhibition at GNYP Gallery in Berlin, which bears a title that doubles as a description: My girlfriend in a short skirt, a row of men between us.

“It’s about that experience of standing in the audience with all these men in the front row and just watching her being seen,” the artist explains. “I’m really interested in this idea of seeing people being seen all the time.”

Gribbon was born in Knoxville, Tennessee, and had the artistic itch from an early age. She painted a portrait of her family on the first day of kindergarten that won a blue ribbon at the county fair. She went on to major in painting at the University of Georgia, where her output quickly began to bear the hallmarks of the work she produces now.

“It was always figurative, always had a personal slant,” Gribbon explains. “I was painting people I knew—friends and lovers—and trying to draw from personal experience.”

Gribbon saved up money scoring standardized tests and making cold calls to subscribers of a magazine called The Progressive Farmer before moving to New York in 2003. Then came another interesting pair of gigs: her first jobs were as a cocktail waitress in a strip club and an assistant at Jeff Koons’s studio. The two experiences were “kind of related somehow,” she jokes.

In 2010, Gribbon had a child with writer Julian Tepper. The couple lived in a second-floor apartment in Long Island City, Queens, while downstairs they ran the Oracle Club, a cultish literary salon and creative space. Gribbon had a studio there and continued to produce paintings, including one notable series that reimagined scenes from art history and attempted to undercut the male gaze by replacing the central figure with a large “X”—a metaphor for what we would soon know as cancel culture.

But mothering a young child and running a venue didn’t leave much time for painting. Gribbon decided to reinvest herself in art, enrolling in the MFA program at Hunter College. “I wanted to connect with other artists who were interested in what I was interested in,” she says. “I was also feeling like I needed to create some more opportunities for myself.”

It was a moment that proved to be a great inflection point in her career and coincided with a big change in her personal life—both of which are mirrored in her work from the time. Her relationship with Tepper eventually dissolved and Gribbon “started exploring my queerness, which I had never done,” she says. “I started seeing women and my personal life entered my work in a way I would’ve previously been uncomfortable with and wouldn’t have considered had the political environment not revealed what it did in 2016.”

She alludes to Trump’s political ascendance and the attacks on women, the queer community, and other marginalized groups upon which it was predicated. “I’ve always made the paintings that I wanted to see, but then it became evident that there were paintings that people needed to see.”

Whereas Gribbon previously channeled her subjects through a filter of art-historical referents, tackling lofty topics like femininity and desire in a more abstract, quasi-conceptual sense, she was now distilling those themes into moments all her own. She started introducing herself into the picture, literally.

“I wanted to reveal as much of myself as possible,” she says. “I was just looking to the material that was closest to me and considering how to depict intimacy. So I started making a lot of paintings of my girlfriend and my child.”

Looking on as the subject of Gribbon’s sensual, expressionistic canvases discovers new love also feels like an exercise in watching an artist discover her voice.

“Mackenzie’s so fearless—it’s one of her best qualities,” Gribbon says. “It’s hard as a woman in general, because of the way we’re socialized, to be really bold in the way that you present yourself and your work as an artist. And she’s helped me with that. She’s helped me be more bold.”

She points to a 2019 painting called Mackenzie’s Lack of Interest in Gallery 827, which depicts her girlfriend walking past two large gilt-framed Old Master paintings at the Met. “That’s about her lack of interest, which I love too,” she says, laughing. “I love how she’s just like, ‘I don’t give a fuck about all these straight people and their romance.’”

Instagram also became an important influence on Gribbon around this time. Both Gribbon’s work and her Instagram feed exude an effortless coolness. Her paintings often feel as if they were born from a camera phone photo—and many actually are. Part of it is the perspective: Gribbon’s scenes tend to be oriented from a lower, hip-high angle, for instance. But more to the point is the way we use our little pocket cameras—to spy, to flirt, to talk without words, to record those little quotidian snippets of bliss—which is how the artist paints, too.

“I’m fascinated by the way we construct personal narrative,” she says. “For me that interest came because my life really had some major shifts and felt turned upside down a few years ago, and I had trouble making sense of who I even was and how I got here. So I started thinking a lot about the stories that we tell ourselves and how that plays out in the mind.”

Jenna Gribbon’s new exhibition, “Regarding Me Regarding You,” opens September 10, 2020, at GNYP Gallery in Berlin.