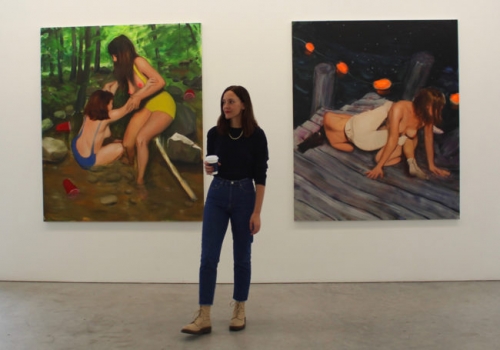 Tennessee-born, New York–based figurative painter Jenna Gribbon is showing two new bodies of work at Fredericks & Freiser gallery in Chelsea through November 2. One comprises intimate scenes from the artist’s life, like her son asleep in bed, or her girlfriend at a museum. The other shows bold images of women wrestling, at once dramatic, awkward, and humorous. Gribbon mines myriad techniques from European painting, like the dramatic poses and lighting of the Dutch Golden Age, or the hazy landscapes of Impressionism. But she includes contemporary touches—visible tan lines, logos, and red Solo cups—and breaks compositional rules, drawing viewers’ eyes to a painting’s corner, or cropping a figure at her feet. Below, the artist discusses how she uses painting to traverse centuries, and her decision to render her nude figures’ nipples in fluorescent pink.

“When I Looked at You the Light Changed” is the title of this show, and also of the first painting of twenty-seven that you see when entering, which captures a moment when my girlfriend and I were having breakfast. I thought she looked really attractive then, so I painted her. It’s part of a body of work that grapples with how our personal memories are affected by our habit of constantly documenting our lives. We have so many photos of all our experiences, which influences the way we remember them. Sometimes you’ll think you remember something, but the photograph shows it differently. I’m painting from photographs that I took, but I’m not staying very true to them. In Sand in her shoe [2019], for example, I painted a daytime scene but gave it a night sky.

The show also includes a series titled “Wrestlers.” I hosted a couple of wrestling parties, where I photographed my friends’ matches. The paintings, all of women, are meant to feel staged in contrast with my small, intimate, candid works. And the wrestlers are superimposed into settings from my childhood or adolescence: my grandmother’s kitchen, Waffle House, my high school bedroom—all places in Tennessee or Georgia. I was thinking about how sometimes, remembering your past can feel like a superimposition: it can be very surreal to imagine your current self in a past context. Some of the backgrounds are painted from photos, some from memory, others from a combination of the two. The lake in Night Swimming Wrestlers [2018] is made up—I wanted to re-create a feeling rather than a particular location. The sensation of lake water at night is very distinct, and I remember vividly how it felt as a teenager.

Some of them don’t really look like they’re wrestling; they look sexual. Blackberry picking by the side of the road wrestlers round two [2019] is kind of aggressive. One of the women’s faces is strained. But there’s also a gentle grab of the flesh, which I find funny. I wanted to give the subjects an activity that wasn’t completely passive, and show them as aggressive and struggling, though their poses are sometimes awkward or tender. I’m drawn to painting tropes that persist throughout centuries: the female nude, the wrestler—but in the art of the past, wrestlers are always men.

I rendered all the wrestlers’ nipples fluorescent pink. I’m participating in the current debate over whether women’s nipples should be censored on social media, or covered in public. The color is meant to create a slight discomfort: the nipple is this place where you’re not supposed to focus, but here you can’t help it. The idea is to make viewers self-conscious of the way that they’re consuming images of bodies. The neon nipples invite you in, but they make you think about where you’re looking and why, while also being a bit playful and silly.

I use the florescent pink in other paintings, often as a kind of incongruity that pulls you into the present. One example is the exit sign in Mackenzie’s Lack of Interest in Gallery 827 [2019], which shows paintings hanging in the Met: Mackenzie, my girlfriend, is a lesbian disinterested in the type of heterosexual romance depicted in the paintings. The exit sign in the upper left corner stands out the most, though I clearly spent a lot more time rendering the paintings on the wall. So it’s about her lack of interest, but also my interest in art history. I love that with paint, I feel I can time travel. You can put someone in a setting that looks fifty years old, or two hundred years old, and then pull the rug out from under the viewer with a small touch of the present, like the few red Solo cups disrupting an otherwise idyllic creek in Creek Wrestlers [2018]. I try to travel centuries within a single image.

It’s not pee [2019] shows a woman sitting next to a bed sheet with a wet spot: it’s about female ejaculation, but it’s not a very sexual painting. It’s more banal. It’s shown next to Weenie Roast Wrestlers [2019], which is dramatically lit yet very silly. The hot dogs are obviously a phallic reference, scattered on the ground in the dirt and the ashes of a fire pit. Yet there’s danger involved: a wrestler’s foot is awfully close to the hot coals. Working Mother [2019] is a portrait of my sleeping son, capturing the bittersweet feeling you get when you come home from work too late and your kid’s already asleep, yet they’re so sweet while they’re sleeping. Throughout, I wanted to mingle motherhood, sexuality, humor, and the everyday, since we often act as if we have to relegate separate parts of ourselves to these things, which is a bit absurd.

-As told to Emily Watlington