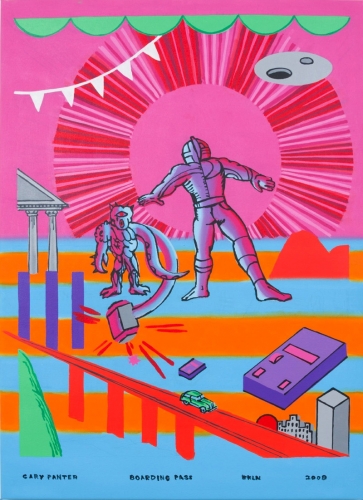 Andy Warhol once said that he wanted to be a machine. He wasn’t joking. He admired the efficiency, productivity and durability of machines. Most important, he was fascinated by their immunity to emotional turmoil, and he believed that set them free.

People and machines and the psychological impact of their collision are the subject of “Press Your Space Face Close to Mine.” Organized by artist Aaron Curry, the insight-loaded exhibition at the Pit in Glendale turns Warhol’s fascination with machines on its ear.

Rather than fantasizing about machines because they keep the messiness of subjectivity at arm’s length, the works by 12 artists embrace the streamlined look and hands-off feel of machine-made objects to amplify the emotional resonance of paintings and sculptures. Calm, cool and collected they are not.

Cartoons figure prominently. To glance from Robert Williams’ “Six Eyed Kook as the Very Embodiment of the Anti-Clown” to Gary Panter’s “Boarding Pass” is to travel from a world of fastidiously described detail to one of stylized icons.

Barbara Rossi’s “Dog Gone Heads or Tails (Dog-Matic)” and Karl Wirsum’s “Neon Nose (Case of the Cross Current Crumpet)” are even more abbreviated, their blunt compositions intensifying the impact of their clashing colors.

Knockout paintings by A.R. Penck, Sadie Benning and Don Van Vliet (a.k.a. Captain Beefheart) add a jolt of lizard-brain decisiveness. The same is true of Dieter Roth’s bound volume of comic books, each page punctured by a slew of perfectly cut circles.

The mismatch between our selves and our self-images takes charged shape in three masks by Richard Hawkins and Elijah Burgher. John Wesley’s “Ill Fitting Bikini Top” is a tour de force sendup of Minimalist detachment, its blocky forms throwing a monkey wrench into a visitor’s perceptual machinery.

Curry’s contribution is a metal mold that he has fitted into a Mold-’a’-Rama machine from the 1960s. For 20 bucks, you can plug a token into it and watch its miniaturized assembly line come to life, steaming and sputtering and pulsing as it produces a small plastic sculpture that is yours to take home.

Curry’s machine may not have feelings, but that doesn’t stop it from affecting yours.