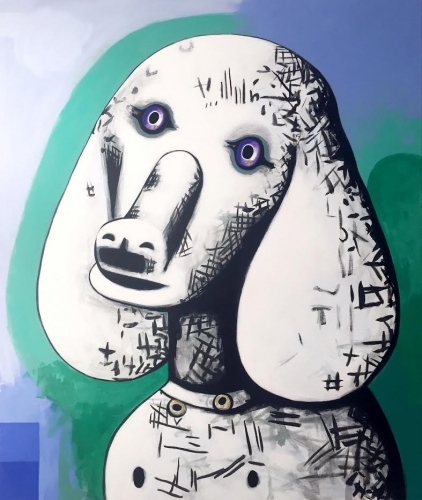 CRUSH/Amagansett is pleased to present “Banner Day,” paintings by David Humphrey, a series of large scale paintings on vinyl with grommets which will be hung around the CRUSH/Amagansett property and in our potato barn exhibition space.

The day before the Presidential inauguration in 2017 was declared “a day without art” in solidarity with the Women’s March happening around the country and was also the day of the opening of Humphrey’s show at his New York gallery. An exhibition is often a time to pause or reflect on ones practice before beginning again, but this turn in American politics was too fresh and disorienting to be productive for the artist.

On his travels between his home and studio, he had often encountered a shop with a sign and banner printer and imagined that it could be employed to make artworks if the right occasion arose and post-election seemed the right time. He emailed a snapshot from his phone to be printed five by seven feet on vinyl with grommets and then began a yearlong adventure collaborating with, vandalizing, augmenting, or haunting photographs taken mostly during that routine Long Island City commute.

“Sidewalks and streets are an ever-changing ground for painting-like marks, spills and assemblage. Gravity holds everything in place as we move over it on foot or in a vehicle. When the seen thing becomes a printed photograph one has time to linger on all the details we presumably saw but sensibly forgot because our brain would explode if we didn’t. But in a painting it is rewarding to care about each and every detail, and to care again and again. Painting on these enlarged snapshots was a way to reinhabit a recently exited past with the ability to project back into it it or to conjure things and beings from it. Each painting here emerged from a series of improvisations or gestures. Sometimes squeezing a tube of paint onto the print and pushing it around was enough to establish contact with the photograph’s weird otherness.”

David Humphrey is a New York artist who has shown nationally and internationally. He has received a Guggenheim Fellowship and the Rome Prize among other awards. An anthology of his art writing, Blind Handshake, was published by Periscope Publishing in 2010. He teaches in the MFA program at Columbia and is represented by the Fredericks & Freiser Gallery, NY.