The Child & The Brat

Fredericks & Freiser is proud to announce the first New York exhibition of paintings and drawings by Justin Craun. Craun’s work depicts seemingly familiar subjects (mothers, businessmen, children, etc.) rendered in dense optical arrangements that are at once vivid and pulsating. The paintings employ an irregular sense of composition, dragged surfaces, and vibratory color that illicit a hyperactive sensory overload. Craun’s drawings employ razor-sharp line work and concentrated areas of broken patterning to heighten and place his figures in spaces that are simultaneously flat and dimensional. Depicted with equal parts humor and dread, Craun’s work explores greed, fear and disillusionment. Yet these folks couldn’t be happier.

About the Artist
Justin Craun was born in 1982 in Maryland. He has been included in group exhibitions in the United States and London including One in the Other, London and Bellwether, New York. Currently he has a solo show of drawings on view at Franklin Artworks, Minneapolis. He lives and works in New York. 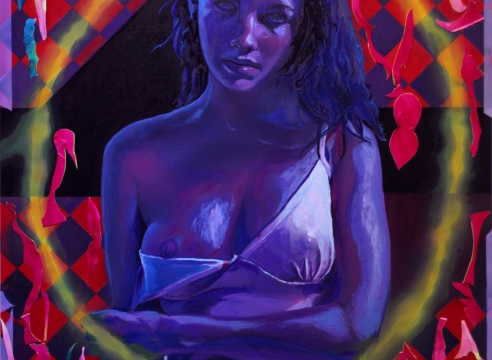