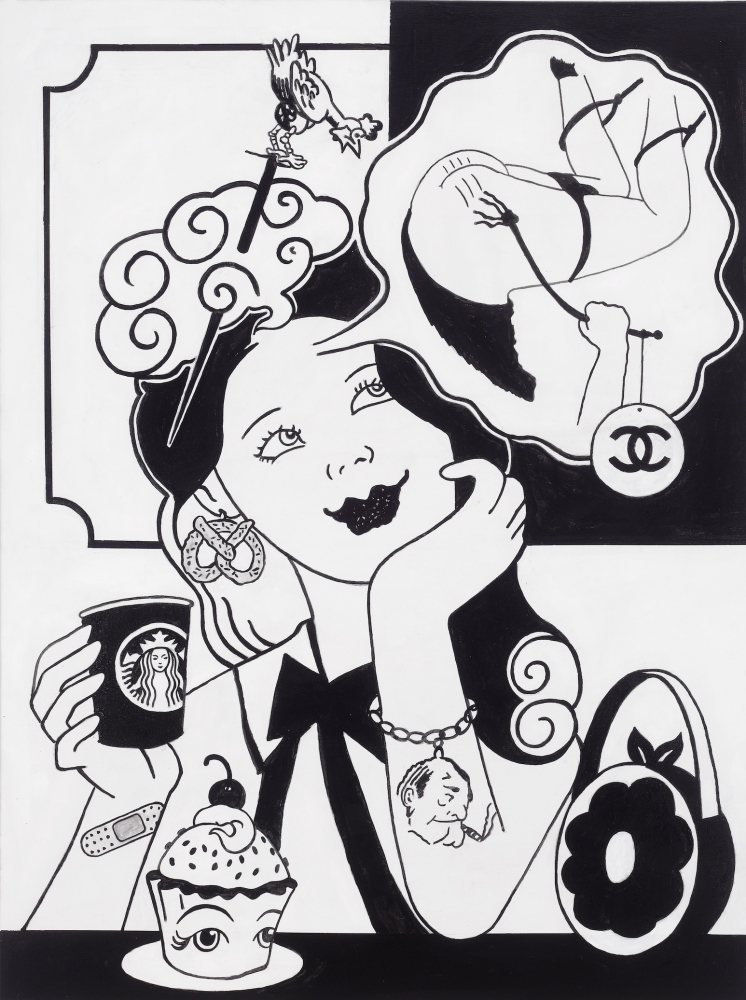 The cartoonlike paintings that Steve Gianakoas has been making since the early 1970s have long been perverse, and this particular group seems to me no more or less so than earlier ones. But it ranks with the best of his work in its formal intelligence, and in the friction that quality creates with its decidedly sordid content. Like those Hitchcock films so artfully constructed that you find yourself rooting for the criminal, the paintings are utterly involving, but the viewer who enjoys them may end up feeling queasy about himself. The issues Gianakos is raising, though, are never far from the surface of psychic life. As graphic plays of black and white planes and lines, with occasional grays, the images have a basic unreality, nesting themselves securely as fictions, but the mind that tries to write them off as such is intercepted by reality.

The paintings fell mostly into two groups. In one, a woman's naked body in pure white is juxtaposed with the body of a monster--gray, warty, misshapen, slobbering. The occasion, alas, is some kind of date, or rather, and worse, its aftermath in bed. In She Was In No Hurry to be Married Again, 2013--Gianakos's comic titles, though not crucial to his paintings' effects, as the captions of cartoons are, do add to and reinforce them--Snow White cozies up to Rumpelstiltskin, or perhaps to an orc from the Lord of the Rings, but frowns as she tentatively puts her tongue to his whiskery lip. Similar scenarios appear in He Loved the Flip-Flops She Gave Him, 2014, though this girl, her face recalling Roy Lichtenstein's comic-book heroines, seems more erotically engaged, and At First She Was Reluctant, 2013, in which she actually looks happy.

The second kind of picture shows a woman alone, and here Gianakos produces more intricate and rewarding compositions. In It Was Hard to Tell What She Was Thinking, 2014, a woman enjoying a coffee and a cupcake gazes smilingly into thin air. Despite the title, a thought bubble tells us just what it is that she's so fondly thinking about: an s/m scene featuring ropes and a whip. The painting is sharply divided into rectangular panels of black and white, against which Gianakos sets rhyming curlicues and flourishes to describe the woman's hair, her handbag, the shape of the thought bubble. He also stocks the image with unsettling details: The cupcake, for example, shows a face on its paper wrapping, which may make the dome of cake above that face an exposed brain--a head with the skull sliced off above the eyes--and this idea gets tied to the woman's hat, also brain-like. On the other hand, given the way the cake is described, it could also be a testicle. Enjoy your lunch.

A number of these paintings, including She Was A Complex Mix of Sweet and Savory and The "Baby What" with Noodles was a Hit, both 2013, seem to show the same woman in the same setting--a Chinese restaurant, perhaps?--and often in the same stance, set frontally and looking obliquely off to the right. It is a pose that puts her on display, but her erotic predispositions and overall fierceness make her something other than objectified: This is a woman who wears scissors as ornaments in her hair, who slices her cheek with a razor (It Was About the Pursuit of Excellence, 2013, is that work's title), who indulges her appetites and fantasies. Meanwhile, the other group of paintings shows women at the mercy of men, or bestial parodies of men. We might be troubled by the violent and sadomasochistic elements of Gianakos's work, or by the pleasure we take in them, but we can't help but notice that it is when he shows a woman existing for herself, in the absence of men, that his imagination really takes off.