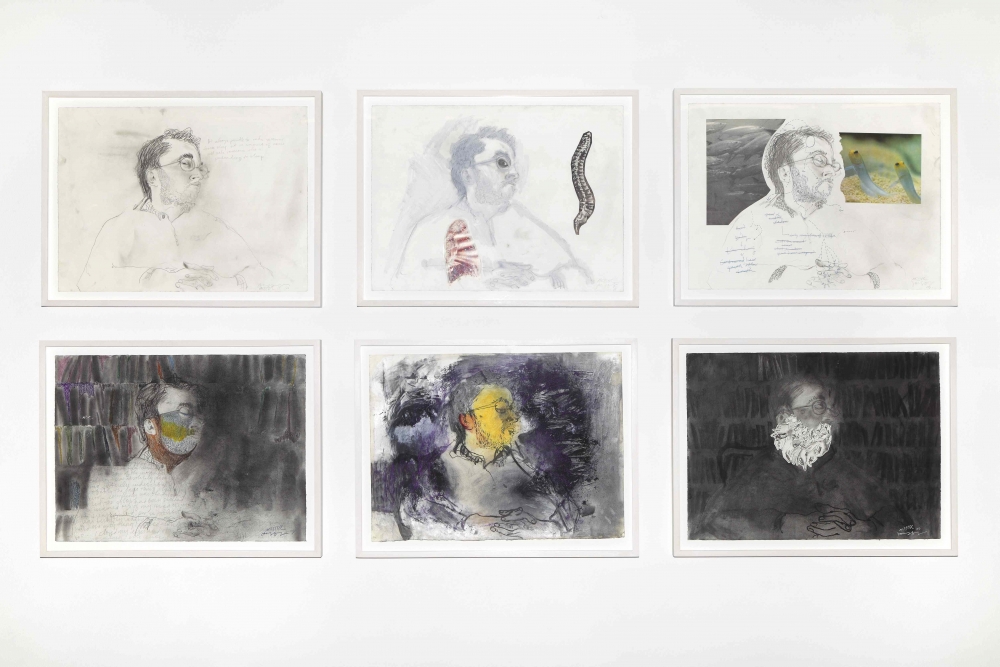 It’s summer reading time at three Chelsea galleries: This season, Fredericks & Freiser, Sean Kelly and Paul Kasmin are all exhibiting work that integrates text and image, celebrating the written word and contemporary literature through visual art. At Fredericks & Freiser, the artist Sam Messer has collaborated with the literary luminaries Jonathan Safran Foer and Denis Johnson to produce sculptures, paintings, drawings, prints and a stop-motion animated video called “Denis the Pirate.” The actor Liev Schreiber narrates the film, while the indie-music mainstays Sarah Neufeld (of the Arcade Fire) and Colin Stetson provide the score. In “Atlas of Stress and Anxiety,” arrows and scribbled text describe elements of a drawing that looks very much like Safran Foer’s face in front of a laptop. They’re humorous and self-deprecating notes; the phrase “Semitic giveaway” appears frequently.

Many of the pieces in the new group show at Sean Kelly, “By the Book,” turn books themselves into art. Claudio Parmiggiani’s sculptural piece includes a boat model atop a stack of books; Peter Liversidge’s “Ex Libris” comprises a mound of them on the floor from which visitors may select one to take home; and Marcel Duchamp’s “Le surréalisme en 1947″ is displayed on the wall in all its cheeky glory — out of the cover emerges a form that looks like a breast. Glenn Ligon’s “Untitled (Study for I Feel Most Colored)” demonstrates the power of combining text and image. In thick black letters against a white background, Ligon’s message — “I feel most colored when I am thrown against a sharp white background” — takes on new dimensions.

And down 10th Avenue at Paul Kasmin Gallery, “The Written Trace,” featuring established artists such as John Baldessari and Ed Ruscha alongside younger ones including Zachary Susskind and Rose Salane, explores the visual qualities of words. The show reveals how artists have interpreted and used words throughout time: Two of its more unusual works, an illuminated manuscript from the 1500s and a polished steel hatchet with acid etching by Shaun Crawford, span a half millennium.