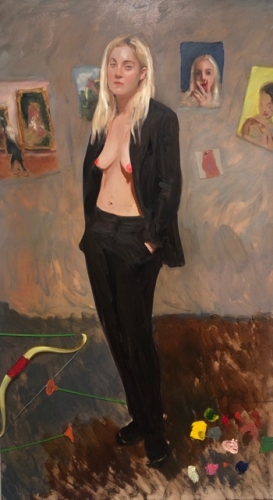 This sight pleased Jules - it was so ordinary and reasonable. Walking alone here, even in his sweaty clothes, he was close to the secret workings of things, the way people lived when they were not being observed. In himself there were no secret

workings: he had no ordinary reasonable life.

Perrotin New York presents a group exhibition surveying contemporary, figurative painting that seeks to re-examine the romantic embrace. The history of painting is rife with heterosexual depictions of intimacy: couples caught in a tender embrace or in vulnerable companionship. Yet, conspicuously absent throughout, are queer examples of these same behaviors. This exhibition proposes an investigation into sensitive depictions of romance and the poetry of contemporary quotidian queer life.

Homosexual love often eluded the canon, and even when not outright censored, found entrance through the usage of tempered and codified presentation. In the wake of Stonewall, and later, in response to the AIDS epidemic, a stark and necessary political turn was taken. Artists shifted their practices to create iconic, combative works, which acted as virulent retorts to oppressive censorship and the urgency of the times.

Today, with less anxiety, censorship and overt threats, queer artists have begun to fill a gap in the conservative history of painting and propose a prescient romantic vision. The artworks in Them insist concretely on the plausibility for another more just and tender world. Through aesthetics, these works create a conceptual utopianist blueprint for us all. They trade the realities of the here and now for future worlds where the artists’ experiences and emotions are fully expressed.1 Respectively, they portray love without apology and bring poetic voice to current perceptions of queer agency and visibility.

And while safety from censorship and oppression is never fully guaranteed, especially in this turbulent political climate, Them recognizes the true power of this art, not as a means to normalize, but a continuance of queer propositions catalyzing alternative visions of social, sexual, personal and creative life.2