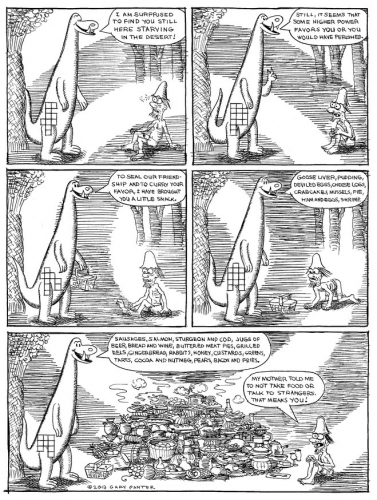 By Françoise Mouly and Genevieve Bormes

Gary Panter, a prolific cartoonist who emerged in the eighties as the leading proponent of punk comics, has long been interested in blending mystical fantasy and literature to create wryly irreverent comics. For over a decade, Panter transmuted each line of Dante Alighieri’s Divine Comedy into two works: the mega-sized “Jimbo in Purgatory” (2004, embossed cover with gold leaf on blood-red cloth) and “Jimbo’s Inferno” (2006, embossed cover with gold leaf on baby-blue cloth), bringing his signature punk sensibility to the ancient stories.

Fantagraphics recently released “Songy of Paradise,” a large hardcover with gold embossing on soft lavender cloth, which focusses on another classic: the Bible, or, more specifically, John Milton’s criticism of one Bible story. Panter tackled Milton’s “Paradise Regained,” a retelling of Jesus’ forty-day retreat into the desert, reimagined with a dubious hero. In place of Jesus is a hillbilly named Songy, a zany wanderer who leaves his mother and friends at home and treks into the desert on a haphazard quest for nothing in particular. Songy is repeatedly tempted by Satan, who appears in various forms, most often that of a dinosaur. A true radical, Songy doesn’t let himself be swayed from his ideals by material pleasures.

Panter stopped by our offices to chat about the project. “You think, I’m gonna die before I finish this. It took five years to draw thirty-three pages, its crazy,” he recalled. Our conversation continues below:

I didn’t want to do Dante’s “Paradise.” There’s a lot of repetition in that work, and I had already integrated a lot of Dante’s “Paradise” into the “Purgatory” books. It’s like a palimpsest—a manuscript that’s doubled. I was seduced by the architecture of Dante, and after a while, it’s kind of embarrassing. Here I am, yet another person seduced by the architecture of Dante. I had to try to find a way to personalize it—which is what led me to Milton.

So you were inspired by Milton’s “Paradise Regained,” which is itself an homage to Dante?

Yes, Milton would be aware of Dante, but it’s a totally different thing because “Paradise Regained” is based on only four or five verses in the Bible—Jesus being tempted in the desert. I got rid of Jesus and replaced him with a hillbilly, who starves himself in the desert until he starts hallucinating Satan.

I haven’t read Milton or Milton criticism, but this seems easy to follow.

Yeah, it’s different from my more formal, harder-to-read books. The story here is actually very simple. Satan says, “Hey, be my pal,” and Jesus says, “Noooo, you’re Satan.” And that happens over and over and over again throughout the whole story. Satan goes, like, “Hey, I’ll tempt you with food!,” and Jesus goes, “No, I’m not hungry.” “What about money?” “I don’t need your money!” That’s the nature of the Milton text.

What are the crossword-puzzle-looking boxes on the demon?

That came from a manuscript at the New York Public Library, at the Cullman Center, where I had a grant to work for ten months. I went there every day and had the privilege of reading Milton, and a lot of academic writing about Milton, so I would know my material. Those boxes come from what I believe was a Javanese illuminated manuscript painted on wood I saw at the library. It represented good and bad luck [using] numbered demons. The demon heads would be hosted on these kind of crossword-puzzle-looking things with numbers that had good luck or bad luck, a bit like those books you get to bet on the horses, you know, lucky numbers, or lucky horoscope, or so I think. But I liked it as a graphic thing to designate Satan.

Oh, I get it. That’s the motif that tells you it’s Satan in all his forms—so, that’s your invention.

I recognize this cute dinosaur.

Yes, this specific character is Danny the Dinosaur, by Syd Hoff, the socialist children’s-book author. That was a book I loved when I was a child.

But why is Danny the Dinosaur making his appearance here—is it to show that Satan takes many different forms?

Yeah—I needed a lot of different forms, and I needed things that would keep me excited. I’m interested in dinosaurs. The other thing that happens is that all these books are broken up in sections, and I kept track of this with the panels, so I’d know where I was in the story. In Milton, I address the issues that Milton addresses one by one.

So you’re re-creating the whole book?

Yes, but it’s not so long. Milton’s poem is only about a handful of verses in the Bible. “Paradise Regained” may be four books long, but it’s all pretty boring stuff.