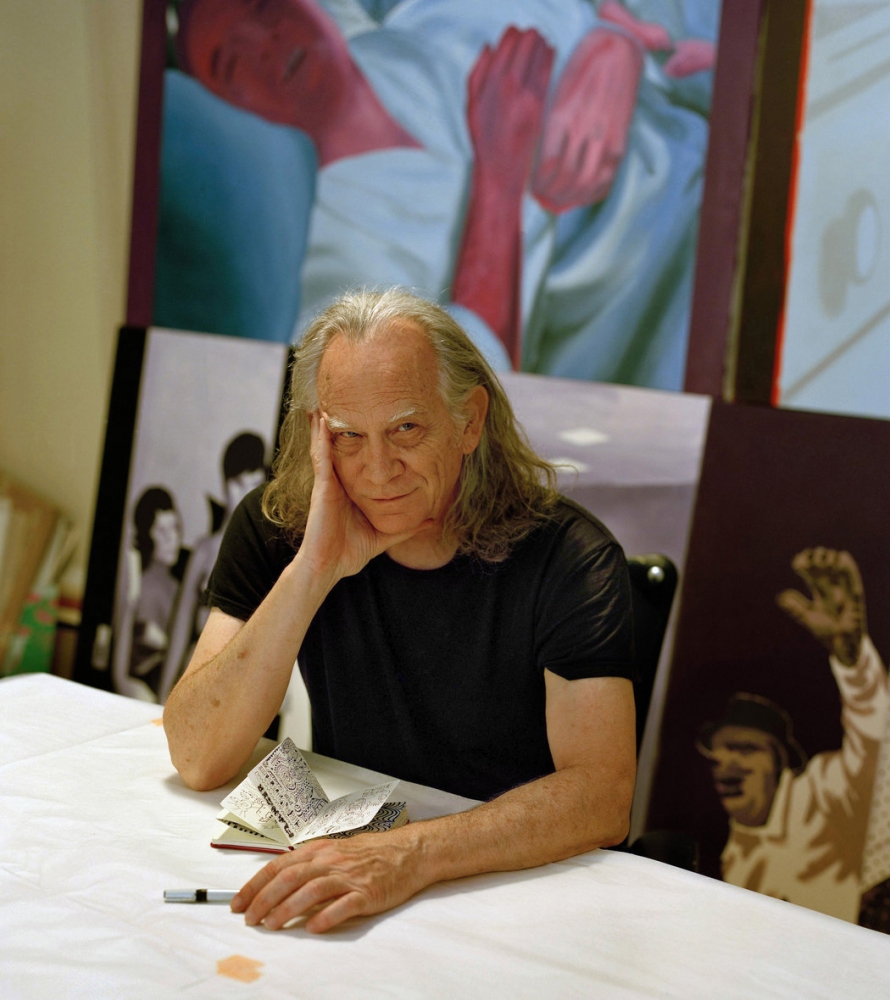 Gary Panter is a painter first. But he’s still probably best known for the wild and woolly comics he started scrawling back in the late 1970s and early ’80s for the likes of the Los Angeles punk zine Slash, and Françoise Mouly and Art Spiegelman’s Raw magazine. The Comics Journal has even called him “the greatest living cartoonist.”

Now, 11 years after his last graphic novel, “Jimbo’s Inferno,” he’s returned to the medium with a striking phantasmagoria of a book, “Songy of Paradise,” which retells Milton’s “Paradise Regained” via the hillbilly of the title. You could even call it “Snuffy Smith Meets Satan.”

So, why comics again? “I really like tapping into the emotions and telling a story,” Mr. Panter said by phone from his studio in Ditmas Park, Brooklyn.

But Mr. Panter, 66, is creatively footloose and has never been content to just draw comics and paint. (He’s represented by the Chelsea galleryFredericks & Freiser, and his art has been shown worldwide.) He’s done light shows, puppetry, design, printmaking, sculpture, and plays rock music. He honed his early hack-slash style of punk pen-and-ink on posters and album covers for bands like the Screamers, the Germs and Red Hot Chili Peppers. Oh, and there were three Emmys in the late 1980s for his set design on “Pee-wee’s Playhouse.” (“I’ll talk about anything — except Pee-wee,” he said, laughing.)

Explaining his jack-of-all-trades attitude, Mr. Panter, who grew up mostly in rural Sulphur Springs, Tex., wrote in an email: “I am wired to make stuff. Life is short and these various mediums have different things to offer, so I am seeing what I can do.”

Emphasizing his broad sense of what art can be, he also once wrote: “I’m aware of Picasso from beginning to end, just as I am aware of monster magazines and Jack Kirby.”

There are certainly flecks and specks of Picasso and Kirby in Jimbo, Mr. Panter’s most famous comics character, a linebacker-looking Everyman whom he created in 1974. “He and his friends are always up against systems of control,” he said. Matt Groening, the cartoonist and creator of “The Simpsons,” has written: “Jimbo is a wild combo-platter of brilliant drawing and stuff you didn’t know could be done with mere pen and ink.” A new Jimbo graphic novel is in the works. And Jimbo even steals into the final panel of “Songy of Paradise.”

Speaking of which, “Songy,” besides giving Milton a jab in the ribs, can be read as a guide to some of the forces and obsessions that have shaped Mr. Panter’s art, including: dinosaurs, religion, psychedelia, rural Texas and comics themselves, as can be seen by scrutinizing the pages shown here.

An Analog World of Dirt

Reggae Mouse and Songy’s other pals here — including that punk-looking dude with the mohawk — might seem like extras from a vintage underground comic, but they wouldn’t be out of place, either, on a yellowing Sunday funnies broadsheet from 1930. Yes, Mr. Panter read Zap when he was a teenager, but his comics collection also included Donald Duck, Little Lulu and Muggsy Mouse.

Snuffy Smith would surely feel right at home at this table, and Mr. Panter, too, works with art materials that Snuffy’s creator, Billy DeBeck, would have been comfortable with — no cold digital legerdemain for him. “I’ve been using old-fashioned tools,” Mr. Panter said. “There are new pen nibs being made now that are like the old tools.” Then there’s the three-ply Strathmore buff Bristol paper and Pelikan Tusche ink, but no Wite-Out — “I have to live with my mistakes.”

Which brings him to his career-long aesthetic. “I’m more interested in the crude,” Mr. Panter said. “It’s why I don’t ink in brush on slick paper. I want to slow the reader down, slow myself down.

“I have 50 years of investment in analog tools and the dirt world.”

Anyone who’s followed Mr. Panter’s work won’t be shocked that in “Songy of Paradise” he’s created yet another character who’s wrestling with God, Satan and religion. His previous graphic novels include the Dante-inspired “Jimbo in Purgatory” (2004) and “Jimbo’s Inferno” (2006). “I’ve been traumatized by religion,” said Mr. Panter, who was raised in a Church of Christ family.

And he still sounds bewildered and amazed when he recounts his summer of 1969, spent in Northern Ireland: “We were missionaries from Texas in Belfast during a religious war. But I was reading ‘Lord of the Rings’ and sneaking off to art museums.”

He added that — even as a kid — he couldn’t submit to doctrine and practice based solely on the King James Version of the Bible. As he once wrote: “I don’t believe God handed it down to us like a tractor manual.”

It’s clear here that, as a boy, Mr. Panter got bit hard by dinosaurs (even Satan looks rather dino-like). Then, as a teenager, he got bit again — by the psychedelic.

A 2008 monograph on Mr. Panter features photographs of his plastic childhood lizards and his books about dinosaurs; his website home page offers a painting of a tyrannosaurus and an artist staring each other down; and, yes, Mr. Panter keeps a dinosaur fossil from Texas in his studio. And “Songy” bursts with dinos, monsters and sundry other reptiles.

Then there’s the groovy stuff.

Mr. Panter’s enchantment with the psychedelic swells from a couple sources. His favorite Zap Comix artists are Victor Moscoso and Rick Griffin, who, besides being influential cartoonists, were masters of the psychedelic San Francisco rock poster in the 1960s. Then there was his first visit to a California head shop in 1968. It blew him away.

“I have a personal, long-term hippie installation project that involves lots of beads and candles,” Mr. Panter said, and it’s meant to evoke that long-gone shop. He’s also working on “an ode to hippie comics”; collaborates on light shows with Joshua White, who created the original Fillmore East blasts of coruscation back in the ’60s; and plays guitar and sings with the psychedelic rock band Twigs of Sister Tomorrow. “The music gets me out of the house,” he said.

This page early in “Songy” reflects the power of place and style in Mr. Panter’s comics. Sulphur Springs, a small town in northeast Texas, for most of the year is a sere landscape of brown, beige and gray. And versions of that spare land of his childhood show up often in Mr. Panter’s drawings.

As for Songy being a poor hillbilly on a vision quest — even his drone “angel” calls him “Slewfoot” — Mr. Panter said: “I’m kind of a hillbilly. My parents ate squirrels and gathered coal chunks from the train tracks during the Depression.” Songy does slyly upend stereotypes by being on a quest for enlightenment. The character is also a cartoonist’s loving nod to hick comic-strip staples like Al Capp’s Li’l Abner, Snuffy Smith and Frederick Opper’s Maud the mule.

In his own comics, Mr. Panter embraces the loose, rough line, the smudges and the mistakes, the crosshatching. Especially the crosshatching: It’s almost as if you can hear the scritch-scratch of his pen nib as you read.

“When I was little my first favorite book was ‘Alice in Wonderland,’ and the main attractor was Sir John Tenniel’s crosshatched illustrations and I wanted to be able to do that,” Mr. Panter wrote in an email. “Also I was always interested in how abstract shadows pile up behind the figures in ‘Krazy Kat’ [by George Herriman]. There are so many kinds of crosshatching to explore and I am exploring them while my hands still work.”

And his “ratty drawing”? “I deliver all the line I can deliver,” Mr. Panter said. “I don’t use Wite-Out. I love the idea of just bringing the work to a certain level.