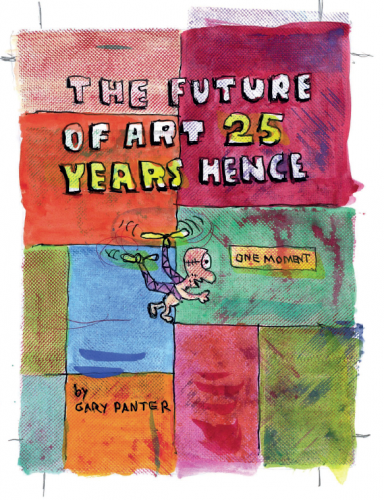 The Future of Art 25 Years Hence is a comic strip specially commissioned for the 25th anniversary issue of Frieze, speculating what art and the world around it might look like by the time this magazine reaches its 50th anniversary.

Gary Panter has lived and worked in Brooklym USA, for the last 30 years. He grew up in Texas, USA, where, inspired as a child by his father's amateur cowboy and Indian paintings, he became enthralled by painting. Following his studies at East Texas State University in 1974, his artistic practice splintered into many activities and mediums. He continues to paint, draw graphic narratives, perform music with the band DEVIN GARY & ROSS, and create performances with Joshua White's Joshua Light Show. In addition to solo shows at the Aldrich Contemporary Art Museum, Ridgefeld, USA, MAGASIN Centre National d'Art Grenoble, France, and Fredericks & Freiser, New York, USA, his work was included in 'Masters of American Comics' at the Hammer Museum, Los Angeles, USA, in 2005, and in the exhibition "What Nerve! Alternative Figures in American Art: 1960 to the Present" at Rhode Island School of Design Museum, Providence, USA, in 2014. In 2013, he was a fellow at the Cullman Center for Scholars and Writers, New York, and was a recipient of a Pollock-Krasner Foundation Grant in 2014. He has won three Emmy Awards for production design on the CBS television show Pee-wee's Playhouse. Upcoming projects include Songy of Paradise, a satirical treatment of John Milton's "Paradise Regained" (1671) and HIPPIE TRIP, an installation evoking early hippie visions.