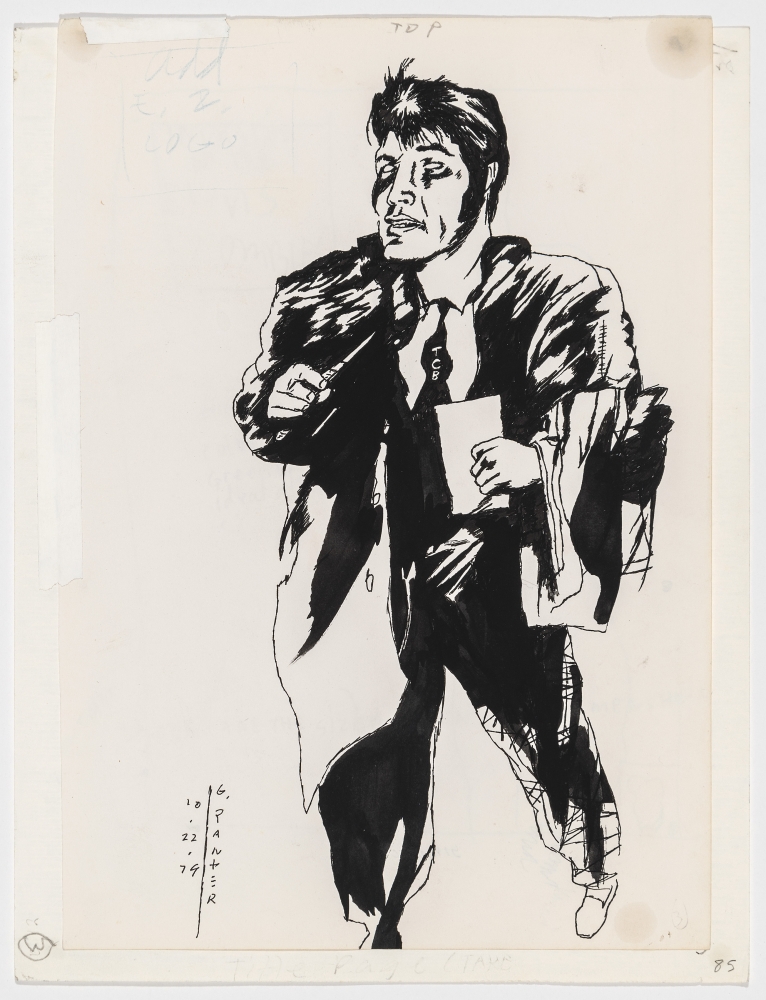 Gary Panter’s prescient “ROZZ-TOX Manifesto” of 1980 states: “Capitalism good or ill is the river in which we sink or swim. Inspiration has always been born of recombination.” In this drawing survey, spanning the years from 1973 to 2019, curators Dan Nadel and Nicole Rudick make the case for Panter’s relevance in an art world that, for some time, was if not suspect then mostly dismissive of comic books, illustration, and the graphic arts—all fields the artist has excelled in—along with his career as a painter.

Most of the works here are made with black ink on paper or board, with the occasional use of Wite-Out. The show includes such quintessential images as the shrieking face logo (designed in 1982) for the punk band the Screamers and the aggressively grimacing character Okupant X—titled after the comic in which it first appeared, and then later adapted for the cover of RAW magazine’s third issue. Panter’s craggy line quality and dramatic application of black in the noirish Elvis Zombie, 1979 (also featured in his 1984 book Invasion of the Elvis Zombies), depicts the iconic singer as an undead bogeyman, reanimated for our pleasure.

Perhaps Panter’s greatest asset is his ability to keep the viewer—and himself—engaged in a medium as straightforward as drawing. From one piece to the next, and even within his extended comic stories, the artist’s style will change from neoprimitive scribblings to controlled contours, with moments of dense crosshatching, obsessive detail, and complex patterns. The latter is best represented in several pages from his 2004 graphic novel Jimbo in Purgatory—a mash-up of Boccaccio’s Decameron, Dante’s Purgatorio, and sundry mass-cultural chimera—featuring Panter’s punk everyman, Jimbo. Given the current popularity of artists’ books, independent comics, and Risograph printing, Panter’s art is a significant touchstone in the lineage and crossover between art made for publication and the gallery wall.