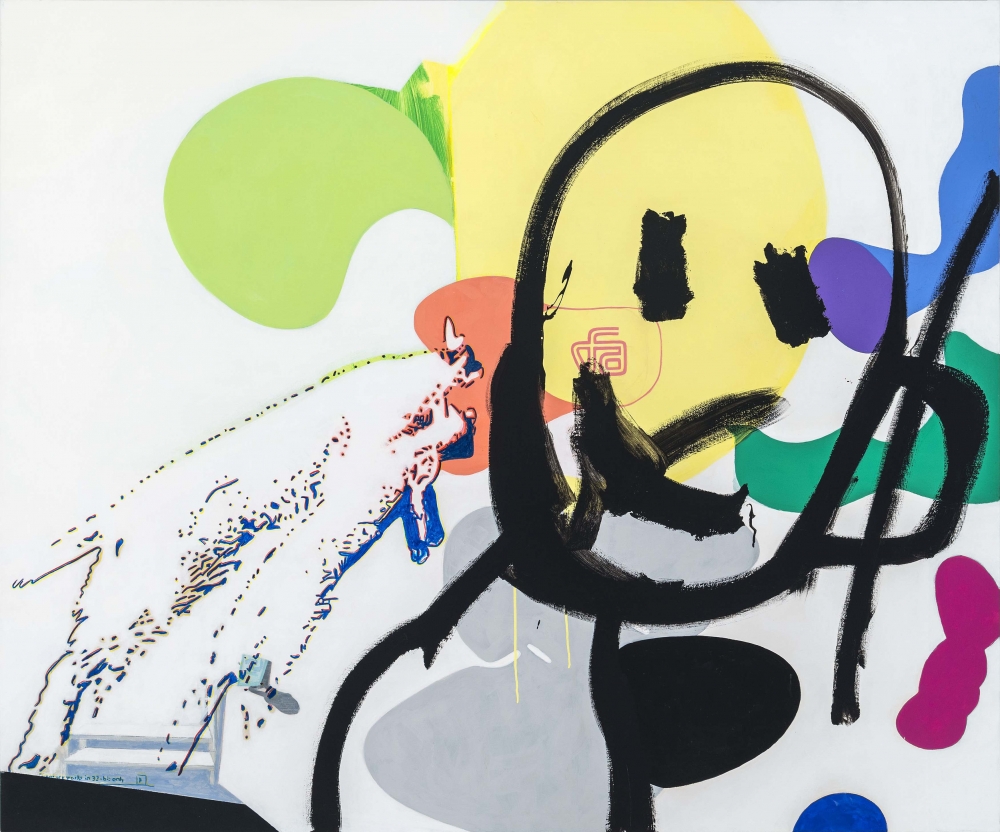 David Humphrey’s visual and intellectual virtuosity – augmented by the smooth surface finality of meticulously applied acrylic paint – is such that he seems to accomplish everything he wants in a given painting. Each one in his current exhibition “I’m Glad We Had This Conversation,” at Fredericks & Freiser, stands as a cohesive essay – establishing a theme, teasing it out, and offering a witty take. If that sounds too neat and squared away for a mode of expression that is supposed to register some mystery and wonder, it isn’t. There is constructive enigma in Humphrey’s purposeful, highly-wrought approach.

His guiding notion for these paintings is the inherent and often insidious ambiguity of a person’s visualized or otherwise objectified encounters with the world – what is left unsaid, unconsidered, or unheeded. The gallery’s press release notes that “Humphrey celebrates the slippery ways images don’t always mean what they seem to be saying. His work promotes the open-ended conversations that happen between us and the objects and people around us, virtually and physically.” If he is visually decisive about the gap between what’s overt and latent, he invites speculation about its content, and that yields a tantalizing dynamism in his work.

In some of his paintings, Humphrey’s apparent strategy is to juxtapose figurative and abstract imagery to plant clear, objective circumstance, on one hand, and nebulous subtext, on the other. In Recharge, for instance, a black man lies on a couch, his cell plugged in and resting on the nearby coffee table. Hovering predatorily over this man at rest are vaguer shapes – some suggesting human form, others mimicking the frenetic rush of life. One interpretation – though there are plenty of others – is that external conflict exhausts him, yet he is compelled to keep confronting and resisting it.

This reading, in any event, points up another salient feature of Humphrey’s work: the inexorable penetrability and degradation of self-imposed borders. People can consciously give in to this phenomenon, as in the sculpture Couple. Perhaps more commonly, it can meet their defiance or sneak up on them. Woodsman depicts the titular figure as a head propped up on saplings, separated from a demurely topless female interloper by two jangled spirals of color and a thin horizontal branch. The woodsman may want solitude, but impulses towards and connections with others aren’t cooperating. Less passively, in Headquarters, a man presumably once deskbound behind his immaculate console becomes increasingly mottled and undifferentiated as he moves away from it.

Some paintings, like Headquarters, are heavily figurative but no less curious, edgy, and provocative than the more abstract ones. A couple of these pieces are literally wise-ass. InPlumbing Bill, Humphrey puts ears and a face on someone’s buttocks, which now peer in the general direction the eponymous invoice in the foreground, all under a sordid red haze that conjures David Salle’s monochromatic figure paintings from the 1980s. The stolid, deliberately primitive flatness of Swimmer belies the cheekiness of a butt crack exposed by sagging swim trunks, possibly unbeknownst to the white man it belongs to, who diffidently covers his naked torso with his arms while chatting with an outgoing black woman standing uninhibited in a teensy bikini.

There’s piquant visual humor in all of Humphrey’s paintings, but it serves as a sociological or psychological (and frequently sexually- or racially-tinged) hook rather than a smarmy snare-drum punch line, to jump-start deeper inquiry – in Swimmer, for example, about relationships between white and black, as well as the figurative tradition. With clear intent and laser-like focus, Humphrey does precisely what a painter ought to do: he makes you look hard and keeps you thinking even harder.