Fredericks & Freiser is pleased to announce Spring in Park Lane, an exhibition of new paintings by Thomas Trosch. Trosch has a twenty-year history of creating wildly vigorous and curiously sensitive oil paintings. Ebullient color and surface texture play a large roll in these works with thick impastos, jagged scrapes, and fine pencil lines applied in a fashion that suggests multiple levels of reading. His typical subject is the society doyenne. Awkwardly rendered and lavishly painted, she holds court among a cast of eccentric characters and a dizzying parade of abstract paintings and biomorphic sculpture.

Spring in Park Lane finds our heroine in love. Not surprisingly she has chosen an artist as her beau. His world of bohemia, with all its primitive brute and brawn, must appeal to her hungry aesthetic. Like in the work of other clunky sophisticates such as Malcolm Morley and Karen Kilimnik, there is a notion of childhood experience and dreams

coupled with adult desire and anxiety. Yet there is humor in the manner in which Trosch's figures dissolve into brilliant passages of painterly excess: in how the mixture is always one part adoration, one part animus.

Thomas Trosch (b.1955) lives and works in Baltimore, Maryland. Most recently he has been included in "New Now: Recent Acquisitions" at the Nerman Museum, Overland Park, Kansas. He has had solo exhibitions at Black Dragon Society, Los Angeles; Richard Telles, Los Angeles (two-person); Jose Freire Fine Art, New York; and Andrea Rosen Gallery, New York. This is his eleventh solo show and his sixth with Fredericks & Freiser, New York. 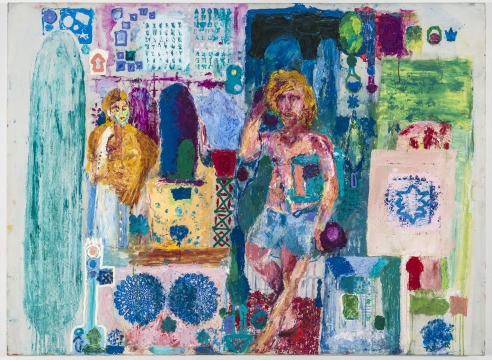