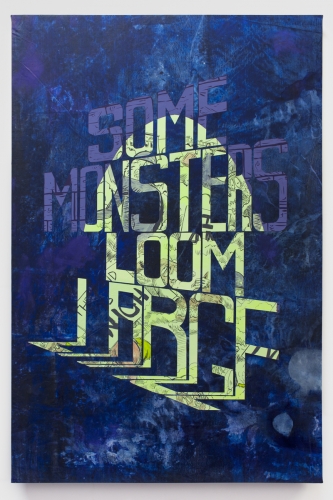 At the Fredericks & Freiser booth, dark and striking were paintings by Mark Thomas Gibson, a Yale School of Art grad and Kara Walker’s studio assistant. One painting, Searchlight, blares the words in all caps: “Some Monsters Loom Large.” The lettering is highlighted to reveal behind it a kind of urban battle scene. History, such as references to the Alamo, and race are recurring themes in his work, which, at the same time, is graphically satisfying, softening the edginess.

The gallery’s Andrew Freiser said, “I don’t really like fairs, but I’m happy if I find even four things I like.” Then, looking over at Jack Shainman’s booth nearby where a spectacular, mostly black El Anatsui curtain hangs, he added, “That could count for two of them.”