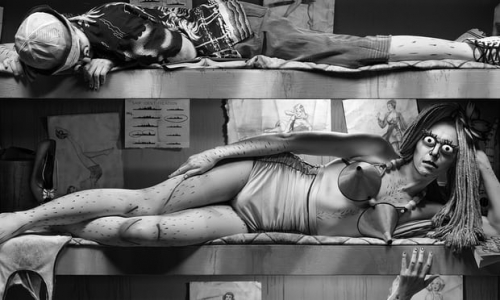 The films of American artists Mary Reid Kelley and Patrick Kelley are, to use a technical term, bonkers. Actors and sets are rendered as though they inhabit a slapdash monochrome painting, rejigged as a silent-era black-and-white movie. The actors wear cartoonish theatrical makeup, which extends to cover their clothes and all the objects and furnishings that surround them. This, in itself, is arresting and strange. Somewhere between the avant garde and the amateur, between theatre and cartoon, history lesson and literature class, their films are equally curious in their subject matter.

For their first UK exhibition in a public gallery, Mary and Patrick (the pair prefer to use their first names) are showing two films and a number of lightbox photographs. In one film, This Is Offal, we find ourselves witnessing the autopsy of a drowned woman. In the second, In The Body of the Sturgeon, we are on board a US submarine, somewhere in the Pacific, in the closing days of the second world war.

It’s hot in there, dank and claustrophobic. You can feel the testosterone murk, the sweat, the sense of fraught lassitude. No wonder one young submariner takes to drinking torpedo fuel, with dire results. While he declines in his abyssal throes, a voiceover recites lines cobbled together from bits of Henry Wadsworth Longfellow’s The Song of Hiawatha, published in 1855. The lines may be Longfellow’s, repurposed and recontextualised, but the voice and the silent-screen antics of her drunken sailor are Mary’s.

Later, she becomes a pair of radio operators: President Truman, delivering a recorded message announcing the dropping of the atomic bomb on Hiroshima; and an astonishing drag act, the female artist pretending to be a male sailor pretending to be a female burlesque performer, with huge pointy breasts fashioned from metal funnels (bought from the Kelleys’ prime prop store, Home Depot). Patrick lurks in the background, playing an accordion.

There is order here, of a very strange sort, and things keep on getting stranger. The artists claim Das Boot, Wolfgang Petersen’s six-hour film drama about life and death on a U-boat, as one of their influences. Judith Butler’s gender performativity and Longfellow’s jury-rigged pentameters give the whole thing a Homeric, epic feel. All this takes place on a homemade set and lasts a little more than 12 minutes. The ribald, comic aspects of the film – Mary and Patrick’s work is frequently ghoulish and hilarious – does not diminish its tragic aspect.

Painted-on stubble and moustaches, wrinkles, scars and redrawn muscles overlay real bodies with an idea of a projected otherness. The use of Longfellow’s epic poem needn’t delay us too much, except to say that the clever literary clowning is as much a kind of drag act as all the parodic, manly makeup and Mary’s performance in the belly of the submarine, urinating on her shipmates. I guess it keeps up their spirits, in the fetid tin-can atmosphere, before the craft accidentally encounters a mine and sinks. The larger theme of the film seems to be the theatre of war and its conduct – and the crew’s distance and isolation from it, as they sweat on their bunks with their pin-ups and their books and their homemade entertainments. One has a copy of Carson McCullers’ The Heart is a Lonely Hunter (the book’s cover is hand-drawn). The world floods in, like water. A single viewing is not enough.

This is Offal (groaning puns and wordplay are part of the artists’ tragic-comic shtick) began life as a live performance at Tate Modern. Here, Patrick plays the anatomist, confronted by a drowned female corpse on the slab. His delivery strikes a leaden note. Mary’s southern-inflected voice has all the eagerness of a keen student. Even dead, as she is here, with coins over her eyes, she’s the star. Her dissected organs and limbs are bit-part players, arguing among themselves. “What are you,” says the liver to the heart, “the Beethoven of organs?”

And on it goes, with its allusions to Ophelia and CSI, to Thomas Hood’s 1844 poem "The Bridge of Sighs," to Andrew Marvell’s 1681 "Dialogue Between the Soul and the Body." The artists wear their academicism lightly, not least because their films are so entertaining; so boisterous, delightful and grim; such peculiar, disturbing and erudite pleasures.

Mary Reid Kelley & Patrick Kelley: We Are Ghosts is at Tate Liverpool until 18 March