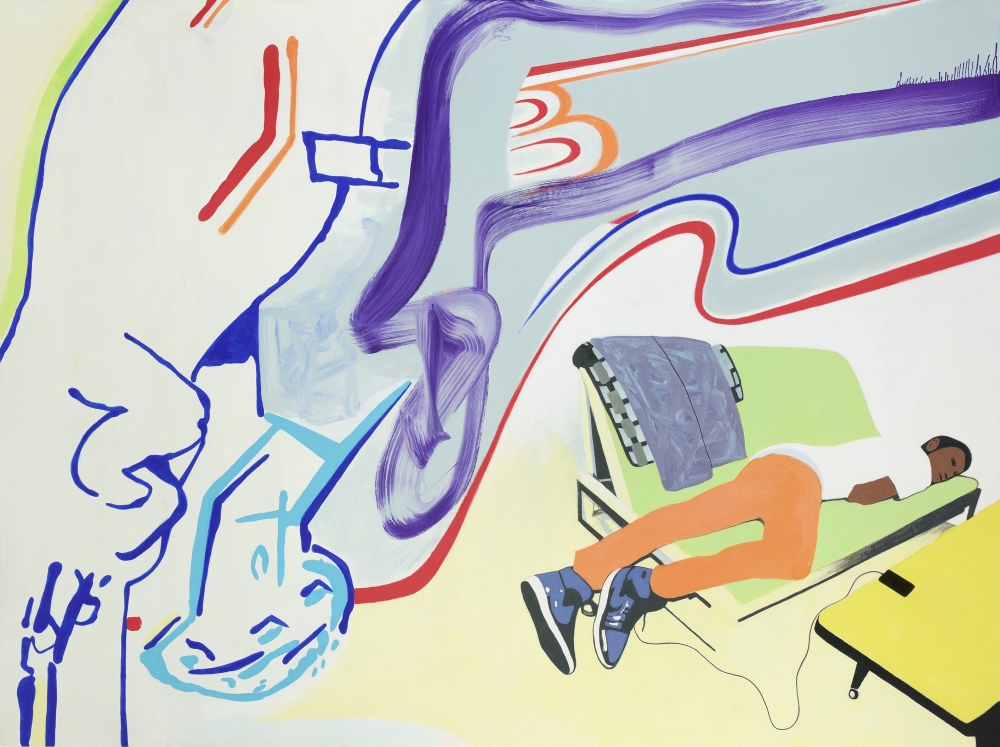 David Humphrey’s recent works, “I’m Glad We Had This Conversa­tion,” at Fredericks & Freiser, continued his ongoing investigation of implied but ultimately incomprehensible narratives, here generated by collisions of divergent pictorial languages, from abstract gestures to carefully reproduced images pulled from the vernacular world, including digital sources. Humphrey can suggest the mysterious and the transient, as he did in The Morning After, 2014–2017, by forcing a pair of stippled, leaping creatures to coexist with clean-edged pools of intense color and then cancelling the abstract color-shapes with a crude, overscaled graffiti-style head. He can hint at the ominous, as he did in Recharge, 2016, by thrusting a crisp photo-based image of a dark skinned boy, face down on a futon sofa, while his phone charges, into the lower right corner of an eight-foot-wide canvas. The boy seemed pushed into place and weighted down by a mass of bravura gestures with a loaded brush and sweeping, controlled, calligraphic lines. Humphrey’s brash billboard palette of saturated pastels and primaries, sparked with black and a lot of white, intensified the implicit contradictions on which his work depends: the calculated conflicts between dissimilar visual codes that he refers to as a kind of “self-collaboration.” His virtuoso paint-handling pulled it all together.

“I’m Glad We Had This Conversation” also included two modest-size wood and plaster sculptures whose bulbous forms, bold polychromy, and raucous, Joan Miró-like energy made them convincing equivalents of the paintings, more spatially articulate of any of Humphrey’s sculptures to date. The color on the more complex of the two, Personage No. 1, 2016, which played slender elements against a swelling core, extended onto the base on which it was set. The resulting, slightly irrational mating of cube and organic form nicely fused Humphrey’s two- and three-dimensional concerns into a single hard-to-ignore object that entered into an intense dialogue with each painting seen behind it, expanding the meaning of the word “conversation” in the exhibition’s title.