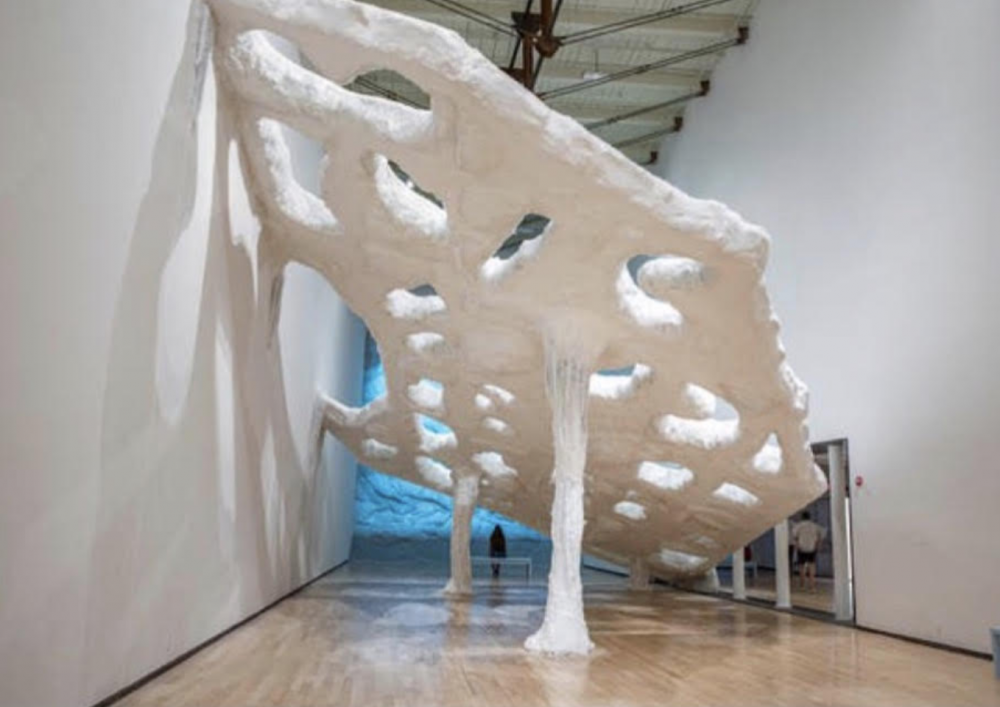 At Mass MoCA and the Clark, there are timely new exhibitions, but our critic finds as much relevance in a still life by Manet, or an Ingres drawing.

"Mass MoCA has also opened two new exhibitions, just a little delayed by the Covid closure. One is a large showcase by Blane De St. Croix, an ecologically minded artist from New York. Tumbledown stacks of painted wood and resin, or a huge sheet of punctured, deliquescent Styrofoam, suggest melting permafrost and worn rock formations; cast sheets of crumpled paper map changing Arctic surfaces. His work has a worthy green heart, though I’m far more interested in art that dramatizes the experience of living through climate change (as suggested through some documentary footage shot in Utqiagvik, Alaska, the northernmost city in the U.S.) than the mere fact of its occurrence."

"In Mass MoCA’s translation show, a pamphlet tells us that the artists “address timely, urgent questions,” even as new wall texts anxiously apologize that the show came together before the coronavirus outbreak and the murder of George Floyd. Might we now accept that contemporary art — even when it turns its gaze to race and nation, disease and climate — is not as “urgent” as a breaking news report? Might the truly urgent enterprise, in a time of plague and protest, be not posing questions over and over, but helping to forge a public capable of answering them?"

"I expected what would surprise me most were the new sanitary rules: how circulation is regulated, how guards handle their new responsibilities, what happens in the cafes and the bathrooms. But the rules weren’t that obtrusive — if you can handle a supermarket aisle in these bad new days, you can handle an enfilade of galleries. The greater surprise was the impact of the art itself, which in some rooms felt like a salve for miserable times, and in others like trivialities from a vanished world."

Apologies for going all Kantian, but what’s revealed in the Covid-era museum is that art’s political power still derives, above all, from having no pragmatic application. It can’t fix the world. It doesn’t function as a slower, more elite communication medium. It stands for itself, it confronts our imagination and our intellect, and so it shapes our capacities as free citizens. Which means there’s as much relevance in an Ingres drawing or Bonnard painting as in Mr. De Saint Croix’s ecological installations or Ms. Rasheed’s textual collages, insofar as each offers us just a glimpse of human freedom — that promise that every day now we feel slipping away from us, and that we still cannot do without.